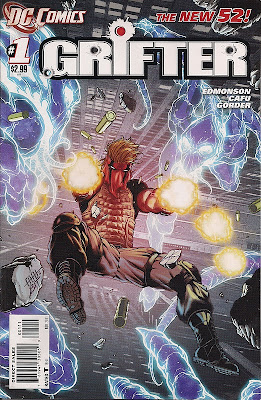 They call him Grifter
Just a guy, a drifter
Better hide, shapeshifter
OK, I've written the theme song so as soon as TV options this for a weekly drama, I'm quids in. For I can easily see this comic making the leap from page to screen, sold as The Fugitive meets The Invaders.
Or if you're a comics fan, Rom: Spaceknight meets a man with awful sideburns.
This New 52 debut flashes backwards and forwards to show us what conman Cole Cash is doing on a plane, stabbing fellow passengers. It turns out he was abducted and experimented on by aliens. Now they're out to stop him revealing all to the world. But he can hear their thoughts. And he's not gonna take it. Nope, he's gonna put a red handkerchief over his face and, er ... I don't know exactly. Shoot a lot, if this issue's spiffy cover by penciller Cafu and inker Bit is anything to go by.
So far, Cole's not someone I'm rooting for. A thief, violence seems to be his first reaction when the going gets rough. I'm behind his army officer brother, assigned to capture him. Also in the picture is an embittered girlfriend/partner-in-crime/possible policewoman, pouting away.
Nathan Edmondson's script reads well enough, but substitutes the 'wow' factor for the 'ugh' factor, with its regular bursts of violence allied to a storyline that is, for superhero comics, pretty mundane. Cafu and Gorder's artwork is appealingly clean, but Cash looks rather skanky with his unappealing facial foliage, like a blond Wolverine.
As ever, though, I have to remember that not every comic is aimed at me. Grifter #1 may have done exactly what it set out to do, and very well at that. Fans of the more street-level comics - folk who want DC to bring back Wild Dog, say - may love this. For me, though, this is one and done.
Bit Cafu DC New 52 Grifter #1 review Jason Gorder Nathan Edmondson