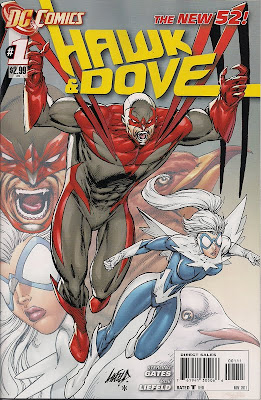 Zombies on a plane. It sounds like a high-concept movie but it's actually the hi-jinks which kick off this new series. 'Science terrorist' Alexander Quirk has loaded a plane with 'monsters of mass destruction' but Hawk and Dove are bidding to ruin his day. The avatars of war and peace stop the monsters and prevent the jet from crashing into the Washington Monument.

Well, almost. The needle suffers a chip, but there's no loss of life. Not that Hawk's dad, Judge Irwin Hall, is impressed, reckoning Hank should have done better. Hank, for his part, is having a melodramatic moment centred on his late brother Don, the previous Dove, who died during 'the worst crisis the world's ever seen'. Oh, if only Don hadn't died. Why did it have to be Dawn who inherited his mantle? Anyone but Dawn!

Sound as if someone has a crush.

Dawn, mind, isn't available for love, she's sweet on Deadman, her corpus delectable. And she's been revealing a secret to him. We're not told what that is exactly, but it seems that there's something she never told Hank. That her becoming Dove wasn't entirely random, she had a connection to Don - perhaps a romantic one.

(Unless, that is, she just never told Hank that she got the Dove powers at the very moment that his brother died, for fear Hank would assume they went into her at the point at which he could have used them most. What if it was, in fact, the second before he died ...)

While the Flashpoint reset button hasn't affected Hank and Dawn's recent history, with the Brightest Day/Deadman link intact, it does seem to have had one happy consequence - old supporting cast member Captain Sal seems to be back from the dead. He was murdered by the villainous Monarch, who was an insane, time-travelling Hank - if the long sequence of events connected to that lunatic character assassination has been wiped out, count me a happy man.

The writer to thank is Sterling Gates, late of Supergirl, who delivers an enjoyably crash-bang-wallop script - lots of action, a bit of charactisation, some soap and a cliffhanger. He seems to be tailoring it to artist Rob Liefeld's interests - massive fight scenes and big emotions, and as such, Liefeld's work serves the script decently enough (click on image to enlarge). 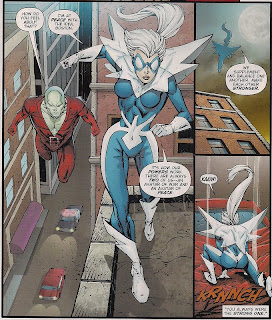 It is slapdash in parts, though, with costume details a bit iffy - at one point Dove's dove design looks to have grown into a spider. And Judge Hall appears about 15, with the white hair a genetic quirk rather than age-related. It could simply be good genes, which might explain the Judge's vanity - he spends a page admiring himself in the mirror while adjusting a tie, only to appear later in the same scene clad in DJ with bow tie. Hey, when you look good, you flaunt it. 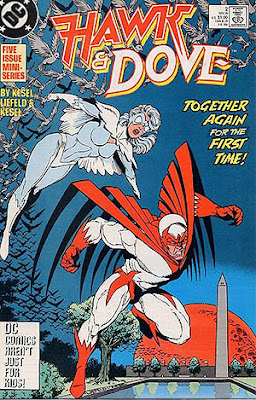 Unlike Hawk and Dove. The current outfits really are hideous, when compared to the versions once drawn by a young artist named Rob Liefeld. Check out the cover from the original, Eighties, mini-series (which also boasted a much better logo than the characterless number that debuts here). The grey tones on Hawk look horrible, for one thing, while Dove needs her old boots and tights back. It wouldn't take much to make them natty once more

My one wish for this book would be to get Liefeld's original artistic partner on board. Karl Kesel is one of the best inkers in superhero comics, and a fine writer too. He co-created the Hank and Dawn partnership with then-wife Barbara Kesel, and it'd be wonderful to have him around to tighten up Liefeld's artwork, and maybe pitch in with ideas. Just a thought.

Actually, may I have a second wish? That Dove stops making odd squawking noises
- don't be so literal, woman! Bad enough she's randomly crashing down on innocent motor cars ...

This issue is entertaining enough to keep me around for awhile. The dumped baggage involving Hawk/Monarch/Extant (don't ask - if you were there, you'd want to forget) is a big plus, as is the likely on-panel return of Captain Sal. A few more of the old Kesel supporting characters wouldn't go amiss either, but I'm happy to see where the very talented Gates plans to take us on his own.
Hawk and Dove #1 review Karl Kesel New 52