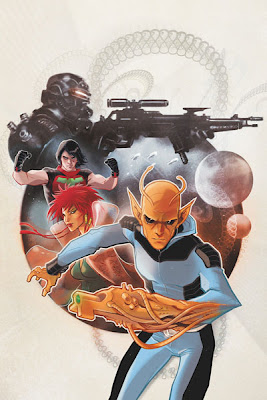 One batch of Legionnaires infiltrates a United Planets world keeping an eye on the empire of the evil Dominators, while the rest mourn recent losses. The first group includes new members Dragonwing and Chemical Kid, whose enthusiasm gets the better of them when it turns out the military observers are working with the alien scientists. The second, among them other newbies Glorith, Comet Queen and Harmonia, wrestle with the problem of how to break into the timestream and find out what's happened to the Legion Lost.

That's the short version. Skip ahead if you don't want chapter and verse ...

Morale is low among the 31st century's greatest super team. Earth-Man died to bring down the Legion of Super-Villains. Several members are missing on a mission to the 21st century. Problems with the timestream stifle investigation by the surviving members. And Colossal Boy, having lost wife Chameleon Girl, has quit the team to join Starfleet.

Normally, an intake of new, younger members would perk things up, but Dragonwing, Chemical Kid and Glorith are mourning their friend Variable Lad, another victim of the LSV conflict. Still, the former two have been assigned a mission with more senior members and are determined to do their bit. A military watchworld, Panoptes, tasked with keeping an eye on alien conquerors the Dominators from a safe distance, has stopped contacting the United Planets. Dragonwing and Chemical Kid sneak onto the planet and pretend to be shipwrecked sweethearts, while a disguised Chameleon Boy, Phantom Girl and Ultra Boy infiltrate the military base.

At Legion HQ on Earth, Brainiac isn't impressed that a memorial statue is being erected to honour Earth-Man, given that until his final Legion days he was a nasty piece of work, but Mon-El points out that he came through in the end. The rest of the active Legion is then gathered for an update meeting, and the sadness is evident, with only another new member, Comet Queen, managing a cheery note. Cosmic Boy reckons the Academy members have been pulled into the team too quickly; Star Boy looks to be confined to a chair after recent exertions; Mon-El is missing his Green Lantern ring; Brainy wants Mon to step down as leader in favour of him; and Dream Girl notes that 'the Flashpoint effect has definitely closed off time travel to the past ... we can't look for help from Superman anymore'.

Back on Panoptes, Dragonwing isn't holding back as she plays Chemical Kid's girlfriend, and he seems less than thrilled. 'Luckily,' the military shows up and takes the pair into custody. Which is exactly what the senior Legionnaires said to let happen. Dragonwing and Chemical Kid, though, are rather wilful ...

At Legion HQ, another former Academy student, Glorith, is in the Time Lab with Dream Girl, Star Boy and another new member, the rather older Harmonia Li. The trainee witch is distressed at the death of Variable Lad, and not feeling at all well. Harmonia cools her down with a blast of wind, but it doesn't improve her mood - she wishes there were a way to change the past. Star Boy counsels that tampering never works, sometimes you have to accept 'that there's a destiny written for us all'. Girlfriend Dreamy disagrees, suggesting she wouldn't have been given the gift of prophecy if all events were fixed.

Meanwhile, the military men on Panoptes are following orders from more senior officers to modify a comms tower so it can send signals to the Dominators. Dragonwing and Chemical Kid attack the traitorous soldiers and the senior members drop their disguises to join in. Phantom Girl and Chameleon Boy get stuck into the fray while Ultra Boy moves to take down the tower. But someone takes the Legion powerhouse out first.

A busy first issue, this, but writer Paul Levitz introduces characters and places quickly and economically with his patented infobytes. It's always nice if basics and background details can be incorporated into the story, but with all the characters in this book it could easily turn into the Legion of Expository Dialogue. Instead, we're quickly into the story, with enough of the Legion flavour for newcomers enticed by the DC New 52 initiative to decide whether or not to stick around.

Existing readers may be intrigued by the Legion's new method of planetary touchdown, the introduction of 'stealth suits' and the new-look Espionage Squad. There's an interesting wrinkle to one of Cham's changes, the revelation of Harmonia Li's powers and hints that Glorith will go down a dangerous path.

It's great that Levitz doesn't go for predictable tension between the older and younger members. The vets are supportive of the newcomers, and the freshers - while adding a bit of spice - are trying to be good Legionnaires. I especially like the tenderness of the scene in which Star Boy, Dreamy and Harmonia Li bid to comfort Glorith

And Brainy's comments on martyrdom serve as a necessary coda to Earth-Man's shortlived Legion career.

My only negative criticism of the script is the same one I had last time the Legion had a number one issue - the lack of a big, splashy threat. Hopefully someone formidable in powers and presence will be along soon.

Francis Portela has drawn a fair few Legion stories over the last couple of years, and never disappointed with his clean, well-composed illustrations. I think this is the first time he's inked himself on the strip and everything continues to look very good. A few of the costumes have been tweaked to bad effect - Mon-El has yet another version of his classic look and as is always the case, it's no improvement - but that's happening in every DC comic right now. A gratuitous Dream Girl torso aside, I relished every panel.

Javier Mena's colours are mostly attractive, darker than recent work on the Legion strip by Hi-Fi, but as with the new costumes, there's likely a DC directive involved. I do, though, hope he lightens up on the facial modelling; some of the toning makes characters look bruised

Pat Brosseau's lettering is excellent throughout - plain, italic, red ... it's all good. As is the cover by Karl Kerschl, Ultra Boy's Blue Steel look and Cham's scary eyes apart