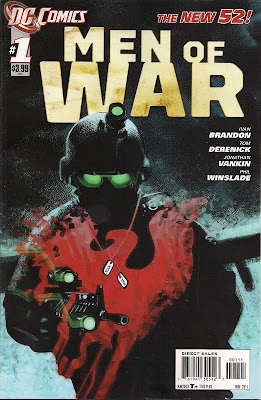 I was going to open this review with the qualifier that I'm not a big fan of war comics, not having read any regularly since DC's last entries in the genre were cancelled two decades ago. Then I remembered that there haven't really been many mainstream war comics since then. I know there have been GI Joe books from Marvel and IDW, but they're set in modern times. And star dolls. For me, a war book is best set in the First or Second World War.

This book isn't. I knew that going in, but heck, the headliner is Joe Rock, grandson of Sgt Frank Rock, star of some of my favourite DC war comics. How could I not give this a go?

There are two stories in this debut issue, one of DC's handful of New 52 comics priced at $3.99, with 28 pages of story. The main feature here shows how Corporal Joe Rock earns a battlefield promotion - basically, by not getting killed. Unlike his superior officer, doomed the minute Joe thinks: 'That's when I learn how much I like Sgt Torisi.' I'd say, that's war, but really, it's just comics. Joe himself is a boor, taking pride in disobeying orders ... but his actions always result in a win, and his fellow soldiers love him for it. I think we're meant to like him.

Torisi, Rock and their unit are sent to Afghanistan Or Somewhere to rescue a Senator who's disappeared while trying to negotiate a ceasefire. Everything goes tits up when a superhuman starts burning the air. Torisi dies, Joe becomes Sgt Rock.

Ivan Brandon's script is best read through gritted teeth. Everyone is very tough. And very cliched. Jargon such as S.A.W. and 'Goose' bring verisimilitude, but they immediately throw us out of the story and into the realm of the accompanying editorial note. 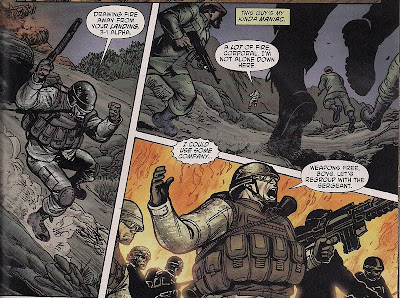 Tom Derenick's artwork is muscular and dramatic, just right for the story, but it's a shame something - the quest for realism? - demands that the soldiers wear identical uniforms (click on image to enlarge). OK, Sgt Torisi has facial hair, but it's not a huge help. There's a reason that the men of Sgt Rock's Easy Company had feathers, flowers and other bits of customisation on their kit. And any beards were massive and ginger.

The colouring is excellent, as Matt Wilson sticks to muted tones, except for the blaze scenes and Rock's piercing blue eyes.

This is an odd duck. The testosterone on display, the constant military jargon, it had me thinking, not for me, but it may appeal to new readers, the kind who don't try comics because they don't 'get' superheroes. But suddenly we're in a superhero book, and this superhero fan, who quite fancied reading a war comic, loses interest. I suspect my imaginary readers will too.

It's as if DC wanted to revive the war genre but bottled out, winding up with a comic that's neither a war book, nor a superhero book. They're going for the DC Universe fan who wants soldiers vs super-people, and I doubt that's a large enough crossover audience to make Joe Rock a star. DC lost its nerve.

Sgt Rock would be ashamed.

The back-up strip is a pure war story, again set in the present day, as Navy S.E.A.L.s run around a city in Afghanistan Or Somewhere (again) and shoot lots of bullets and lots of expository dialogue. The latter is a tad contrived, but it at least imbues the soldiers with a little character and background (Ice and Tracker recall Easy Company's Ice Cream Soldier and Little Sure Shot). 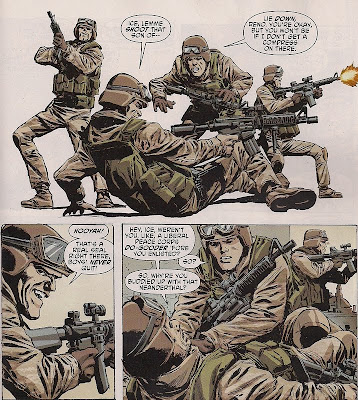 I like this much more than the feature strip. Jonathan Vankin writes an efficient script, while Phil Winslade provides beautiful art, though again, it's hard to tell who's who at this stage. Thomas Chu's colours are, like Wilson's, realistic and thoughtful, with the bright colours saved for gunfire and sound effects.

The cover is by  Viktor Kalvachev, and while the contrast between black and red is striking, it's confusing too - what is that red bird? A fiery phoenix? A bloody bantam? If it's explained in the comic, I missed it.

I know I've read just one issue, but I'd like to see this book retooled. Dump Joe Rock and turn the pages over to Grandad Frank and the 'Combat Happy Joes' of Easy Company. Leave the S.E.A.L.s intact, to make good on their promise, but tell us where their missions are taking place ... I doubt America's enemies are going to take offence at being represented in a comic book - and if this book takes on board the tradition of DC's earlier entries in the genre, they'll at least be presented with humanity.

And one more thing - no super-people. Ever.