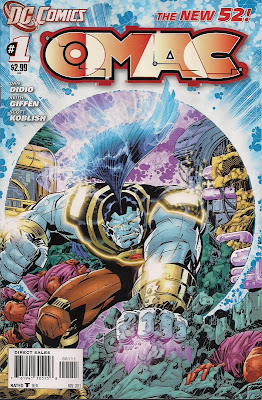 The workers at Cadmus Industries are having a bad day. When they should be breaking down stem cells and drinking skinny lattes, they're having to flee from a tank of a man who's tearing up the research facility in search of one thing - the mainframe.

And the Cadmus Mainframe doesn't just contain commercially sensitive information, it's full of data related to the true Cadmus Project, hidden a mile beneath the public facility. That's where the hulking brute who calls himself OMAC heads, to be confronted by telepathic alien Dubbilex and his corps of guards.

Meanwhile, Cadmus employees Jody Robbins and Tony Jay wonder where the former's boyfriend, Kevin Kho, is. He only went to the bathroom ...

God bless Dan DiDio. DC's co-publisher reshapes the line and gives himself one of the choice slots. To say I never enjoyed the Outsiders issues written by him is an understatement.

But this has Keith Giffen doing The Full Kirby. I just can't resist such massive, mad stylings. Just look at the Kirby Krackle on that cover. There's more inside. Page after page of eye-poppingly powerful pencils from Giffen, with spiffy inks from Scott Koblish, dreamy colours from Hi-Fi and funtastic fonts from Travis Lanham (click on image to enlarge). 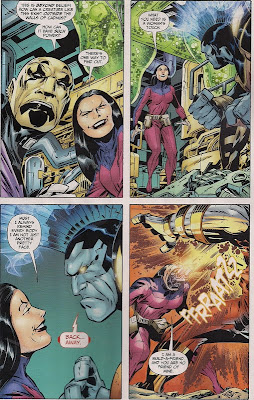 And wouldn't you know it, Dan DiDio's script is dandy too. Sure, there's the odd moment of over-description, but I expect that's Kirby homage rather than ineptness. Because DiDio seems to have grown since I gave up on Outsiders, way back when. He shows a deft touch here, with his Regular Folk dialogue witty, yet true. He also proves a dab hand at handling Kirby's original characters, piling on the lunatic concepts with aplomb. While this OMAC isn't Buddy Blank of the King's shortlived Seventies series, DiDio does give us Kirby Kreations (it's so tough to stop this kind of thing, sorry!) Mokkari and a Build-a-Friend.  And new OMAC Kevin has potential, as the egghead somehow in thrall to an alien mind.

The credits aren't explicit, but I believe DiDio and Giffen are plotting this together, so let's give them both applause for the clever title, Office Management Amidst Chaos. And for creating the most surprising of the New 52 comics I've read so far. What can I say but, Our Mart's A Convert.
Dan DiDio Hi-Fi Keith Giffen New 52 Omac #1 review Scott Koblish Travis Lanham