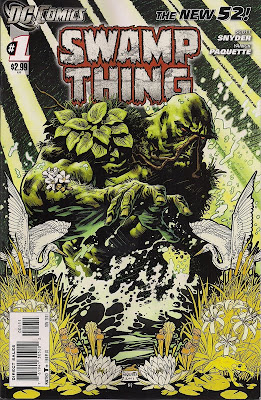 Alec Holland is back from the dead, but he's not the man he was. Saddled with memories of the plant elemental built on his essence after his corpse rotted in a Louisiana swamp, he just wants to forget - it's confusing when you have feelings for 'some woman with white hair' whom you've never met. So he's taken a break from researching a bio-restorative formula and opted for anonymity on a building site.

But he can't escape the past. Not only is the Green - the plant world - constantly reaching out to him, the heroic community is too, in the person of Superman. The Man of Steel shows up and asks Alec if he knows what's been causing creatures to drop dead en masse around the world. That's the presenting issue, anyway; really, the caring Superman wants to know how Alec is dealing emotionally with rebirth, having gone through something similar himself.

Swamp Thing appears in but a single panel this issue, and I barely noticed. Alec is the star, the man without whom there wouldn't have been a muck monster, but a man we hardly know. His narration, and conversations with a colleague and Superman, show him to be a nice guy, an idealist, a genius with plants and  sharp enough to know that sometimes you have to take time for yourself.

By the end of this issue, that time appears to be up, as he can no longer escape his monstrous legacy.

Scott Snyder's script is absorbing, both in the eerie events presented and the characters experiencing them. He makes Alec compelling, while also giving a good showing to Superman, whom we're meeting properly in the new DC Universe for the first time here. In Justice League #1 he's a cocky sod, here he's the humble son of the soil raised by Jonathan and Martha Kent - highly appropriate for a Swamp Thing cameo. I know which presentation I prefer.

Snyder either knows a lot about flora, or he's done his homework, as Alec has the knowledge of a botanist, but wears it lightly. The plant facts presented aren't included to impress, they're serving the story, helping us see how Alec understands the world.

Bringing Snyder's script to life is Yanick Paquette, who immediately stakes a claim to be a first-rank Swamp Thing artist. Yes, there are echoes of the great Steve Bissette and John Totleben (the latter seems to have opened a motel, in one of several Easter eggs), and even the lush illustrative style of the underrated Tom Yeates, but the figurework, the way people move, the storytelling choices - they're pure Paquette.

Letterer John J Hill certainly seems to be homaging longtime Swamp Thing letterer John Costanza. He doesn't have to, as he's a superb craftsman in his own right, so perhaps he's feeling nostalgic. And colourist Nathan Fairbairn may be channelling the great Tatjana Wood, but it's just as likely that he simply shares her storytelling sensibilities - none of the creative team here has to emulate anyone to make good comics, but if they want to bring a classic Swampy style to their original stories, good luck to them.

All in all, this is a terrific first issue, bringing horror to the New DC Universe.

There's certainly one monstrosity in here that's going to be keeping me awake tonight ... 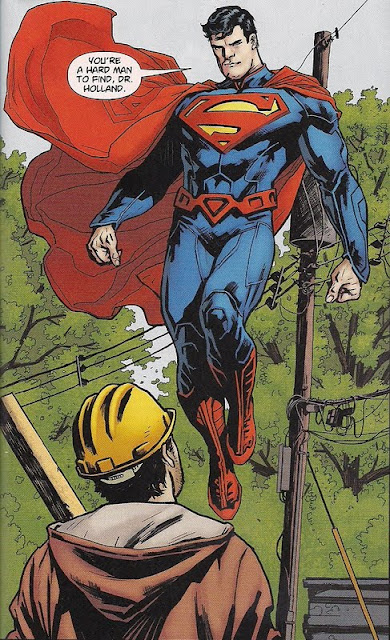