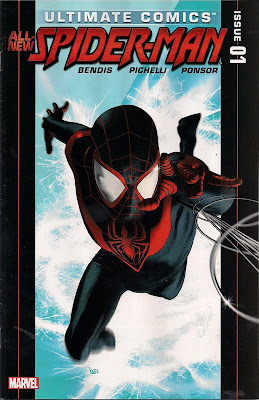 In the original Spider-Man origin, Peter Parker's Uncle Ben was killed by a burglar.

In the new Spider-Man origin, Miles Morales' Uncle Aaron is the burglar.

Nice guy, though. He's young Miles' favourite, the understanding guy he can visit when parental expectations get a bit much. And that's what Miles is doing when a genetically engineered arachnid crawls out of Aaron's bag - the spider snuck in when he visited Norman Osborn's lab to steal  something or other - and bites him. By the end of the issue, Miles is going through changes.

Given the media hoo-hah over Miles' Hispanic/Black heritages (doesn't that just make him, you know, American, same as Peter Parker?), this book is set to attract new readers to comics. Let's just hope the newcomers aren't after 'action in the Mighty Marvel manner' cos they won't find it here. Miles doesn't don that natty Spidey suit shown on the cover, there are no super-villains in the background. There's not even a cat in a tree, waiting to be rescued.

Nope, as with the first Ultimate Spider-Man series, writer Brian Michael Bendis is taking the slow road, letting us get to know his protagonist before the Call to Adventure comes. And for what it is, this comic isn't bad - decent 'young adult' fiction, with the promise of action eventually. And it'll likely read very well as a trade paperback.

As a first issue, though, it's hardly a grabber. The comic is sedately paced from beginning to end, perfect bedtime reading. A threat from Osborn to a scientist flunky is as exciting as it gets. I learned about New York's private school system - you get in by winning a game of bingo or something; met Miles' over-excited Mom and unimpressed Dad; and saw Secret Burglar Uncle Aaron work a big Spidey-style mask.

Miles seems a nice kid, not especially exciting but it's only his first issue, and Peter didn't get exciting 'til he got spidered. Bendis shows that despite his young age (he looks about ten, but I guess he's meant to be a bit older than that) Miles already has a hero's sense of fair play. His family are people I'm happy to spend time with (though I can't see Uncle Aaron being around long). And I like that Miles looks to be getting powers based on different spider-characteristics to Peter.

Bendis' dialogue is fine, and I applaud his use of the Arachne myth as a creepy way into the story. I enjoyed Sara Pichelli's wonderful figurework and storytelling (and marvelled at her fondness for Letratone). I liked Justin Ponser's colours and Cory Petit's lettering (but still hate the use of lower case for the Ultimate books). Kaare Andrews provides a striking cover.

But I just don't find this debut compelling. It's a nice spin on the Spider-Man idea, but lacks any exceptional moments - an original image, a sparkling piece of dialogue, a fascinating villain. I hope kids buy this, and like it, because they're the people this book needs, not those of us who have been reading long enough to be, not so much jaded, but a little more demanding.

So, if anyone follows this book over the months, and it turns out to have something new to say, let me know. I won't buy the back issues, but it can certainly go on my Amazon Greed List.
Brian Michael Bendis Cory Petit Justin Ponsor Kaare Andrews Miles Morales Sara Pichelli Ultimate Spider-Man #1