All-New Batman: The Brave and the Bold #11 review 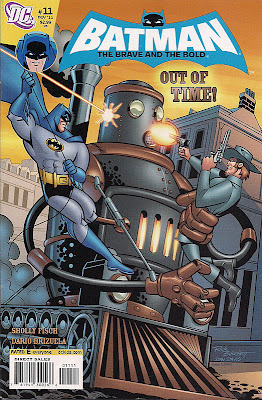 In the DC New 52, Jonah Hex has decamped to Gotham City. In the Johnny DC line, he's there too (click on image to enlarge). 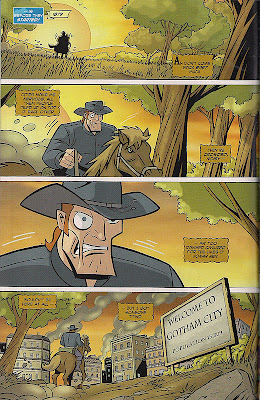 Don't expect saloon girls coming to sticky ends, though. This being an all-ages book the story centres on Ra's al-Ghul, a giant robot and an earthquake machine. It's the latter which sees Batman travel more than a century into the past, when the long-buried plan of 'the Demon's Head' threatens Gotham with massive earthquakes. Jonah has headed east to hunt down the killer of a friend. Bat and bounty hunter team up, with the former handling Ra's and the earthquake machine while the latter faces the steampunk robot.

As ever with this comic - kudos to editor Jim Chadwick - story and art are tons of fun. As well as the two stars, writer Sholly Fisch finds room for DC stalwarts Cave Carson and Geo-Force in a story that's linear, yet circular. And artist Dario Brizuela produces mouth-watering animation style art, full of fun moments both big (Gotham crumbling) and small (Batman's attempt at a disguise).

Adding to the artistic fun is Guy Major, who colours the Old West - sorry, East - as confidently as he tones the Gotham night, and letterer Dezi Sienty, whose work is as sharp as ever. The splendid cover is the work of Rick Burchett, Dan Davis and Gabe Elteab.

If you're enjoying All-Star Western and fancy a more straightforward, fun version of Jonah in Gotham, buy this comic. Or if you 'just' like clever, amusing superhero fare, same deal. I'm a month late with this one, but you should still be able to find it in shops.
All-New Batman: The Brave and the Bold #11 review Cave Carson Dan Davis Dario Brizuela Dezi Sienty Gabe Eltaeb Geo-Force Jonah Hex Rick Burchett Sholly Fisch