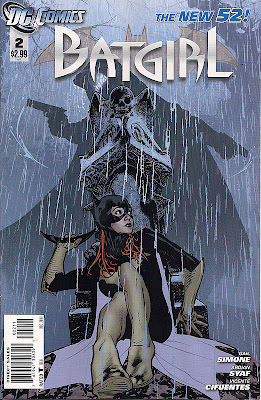 There comes a time in every cover's life when the logo has to be compromised. For the Batgirl masthead, this issue is it. OK, so it's only #2, but look at that gathering of verticles ... there's Batgirl, tombstone, villain and logo shadow, it's like a flaming totem pole. Lose the bat-background, move the 'Batgirl' and Babs your uncle!

Still, it's a lovely image from Adam Hughes, even if Batgirl does look about 14 years old. And the colouring means it won't pop off the shelf.

The cover does gain points for being a direct representation of events inside, as Batgirl and new baddie the Mirror stalk one another in a Gotham graveyard. The villain gets away after a fight, which is unsurprising as the reborn Batgirl is proving rather amateur hour. As we saw last issue, she's leapt back onto the vigilante train too soon; she's not strong enough, not centred enough. God bless her for the determination to keep getting out there, saving lives and trying to track down a madman, but she's going to get herself killed at this rate. It's all very well for Batgirl to keep reminding herself/us that she's a clever bugger, but she's hardly using her head. The girl needs to get out of the bat-suit and concentrate on rehabilitation and retraining.

There's no way this Barbara Gordon mentored Stephanie Brown, the last comics Batgirl, given how often Babs lectured Steph about not going out unprepared. If those stories had happened the same way, Babs would be the world's biggest hypocrite, and telling us so.

As for the story at hand, it's an enjoyable instalment of writer Gail Simone's opening gambit. As well as the tussle with the Mirror, which continues from the hospital where last month he murdered a cop and a killer, there's an uncomfortable moment with her new flatmate, a hint that her 'miracle cure' was a literal miracle, a lunchdate with her physio, and dad Jim Gordon's reaction to the news that Batgirl is back. Barbara also uses her research skills to work out the identity of the Mirror, explaining the names on his kill list.

Simone's narration is sharp, we're with Babs every step of the way as she realises just how rusty she is, and I like the acknowledgement that given her shortness and lightness, taking down big guys isn't easy.The rest of the dialogue is fine, a big improvement being that circumstances mean flatmate Alysia doesn't get to be as annoyingly cutesy as last time.

The art team of Ardian Syaf and Vicente Cifuentes does a creditable job, especially in the extended graveyard fight sequence so superbly coloured by Ulises Arreola, who really brings the rain to life. One thing the artists can't do, though, is make the Mirror's trademark flasher-Mac movement any less silly. No one could. This time we see what's under his cape and I think we're meant to be weirded out. I am, but likely not in the way intended.

A few random points: I like that we get properly tagged scene transitions and signed editor's notes. I don't like that a newspaper would allow the phrase 'two twin daughters.' I'm intrigued that 'Professor Stein' of Firestorm has his name etched in huge letters on a subway car. And I just adore Gotham taxi drivers (cick to enlarge image). 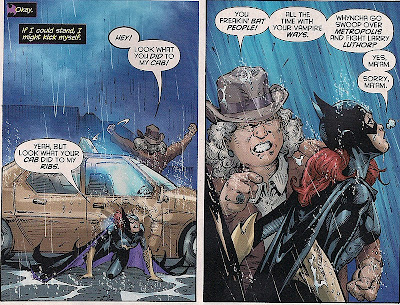 I do hope that Batgirl finds some way of making restitution, the Batgirl-shaped dent is her fault, after all. She can certainly have my $2.99 towards it ...
Ardian Syaf Batgirl #2 review Gail Simone Ulises Arreola Vicente Sifuentes