Batman: The Brave and the Bold #12 review 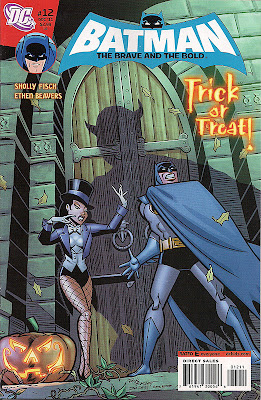 There's been a break-in at the House of Mystery. Who ya gonna call? Why, Batman and Zatanna, of course, the detective and the magician. The House's proprietor, Cain, greets the pair, and introduces his brother Abel ... transformed into a tree.

Changing him back is easy for Zee, but the big question is: who did the deed? Who's powerful enough to get past the House's magical defences? And why is toilet paper strewn everywhere?

Cue our heroes taking on various mystical bad pennies, including Mr Mxyzptlk and Dr Destiny, before working out who the true trickster is. That's when all heck really breaks loose, as a horde of spooky villains are sicced on Batman and Zee. Of course, our heroes have friends of their own ...

The story's called Trick or Treat, but it's treat all the way. Sholly Fisch's script is amusing and endlessly inventive, while guest artist Ethen Beavers' cartooning is nectar for the eyes - there's not a bad panel, while there are plenty of wonderful ones. Colouring them is Guy Major, giving this DC Kids book every bit as much care and attention as he lavishes on the 'grown-up' ones, while Dezi Sienty proves a dab hand at lettering. And regular B&B artists Rick Burchett and Dan Davis provide the creepily cute cover, ably coloured by Gabe Eltaeb (click on image to enlarge). 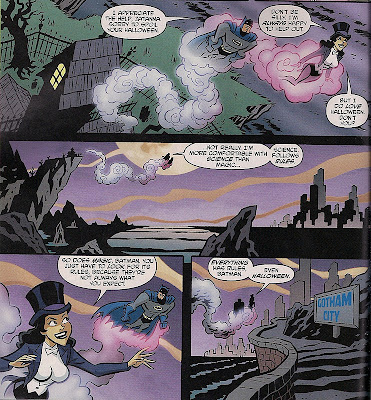 Month after month, Batman: The Brave and the Bold is jam-packed with wild and peculiar characters and ideas from DC's lengthy history, most of which won't get a look-in in the super-serious New 52 line (this issue boasts a subtle Red Bee gag). If you've not tried the series yet, check out this issue - I think it'll cast a spell on you,
Batman: The Brave and the Bold #12 review Dan Davis Ethen Beavers Gabe Eltaeb Rick Burchett Sholly Fisch Zatanna