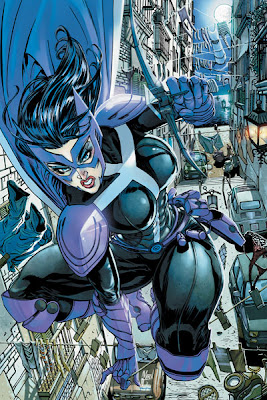 The Huntress is in Naples, out to stop a shipment of drugs reaching Gotham. It turns out the contraband on a boat isn't just illegal substances, it's women. After fighting her way past some goons she gets the ladies out and blows up the boat. While the local crime boss takes out his unhappiness on a lieutenant, the Huntress begins tracking him down. First she pumps journalists for information, then she has a bellboy arrange for a sex worker to be sent round to her hotel, getting her one step closer to the source, and into trouble once more as hoods storm her hotel room. But her fighting skill and mini-crossbows see Huntress prevail, and she leaves the thugs tied up, presumably to send a message to their boss. He sends a message to his failed gang - a lethal one.

Darn. DC's All Access promo page this week hints that this six-part mini-series stars the original Huntress, Helena Wayne, on Earth Two. Well, unless Helena Wayne also uses the name Bertinelli, and there's a Batman and Daily Planet over there, the tease is just Executive Editor Eddie Berganza being evil to get extra sales. Not cool.
What is cool is the vibe of this comic. Paul Levitz, co-creator of Helena Wayne, writes a Huntress closer in feel to the original than to the second version - more professional, less angry. Things go wrong for her, but she doesn't lash out more than she has to; she contains situations. I like this. I don't like that her internal narrative implies she's fine with killing - indeed, the boat explosion likely offed a few crooks, though the script can be taken either way - but we've yet to see what formed this character.

One extra fun touch - after the boat goes 'kaabooom', the next scene opens with the crime boss querying: 'Kaboom...? The whole shipment?'

References to Italian prime minister Silvio Berlusconi and the Arab Spring give the issue a refreshing real world patina which fits this street level tale. I won't, though, complain if later in the series such old Huntress enemies as the creepy Earthworm show up later - six issues of gangsters is guaranteed to lose my interest.

Meanwhile, I'm enjoying the Naples setting, as drawn by Marcus To. Refreshingly for a Bat-book, Levitz sets plenty of action in the daytime, allowing us to see gorgeous Italian buildings and bays at their best. As for the Huntress herself, To excels in showing the heroine's fighting style. He also gives us plenty of variety in angles and his facial expressions are very nice indeed ... Helena has a confident sexiness she's not afraid to use, but she never goes the come hither route. The art's not perfect -  at one point in a tussle Huntress looks not so much flexible as rubberised, and the trafficked women look so alike I was expect a cloning story - but overall, To - inked by the super-sharp John Dell - makes the Win column.

The story is attractively coloured by up and comer Andrew Dalhouse, the one odd note being a sound effect that's tinted only in outline, due to its positioning over a falling bad guy - it looks neither here nor there. There's nice lettering, too, from Sal Cipriano, presumably the book's in-house Italian-American.

Guillem March and Tomeu Morey provide the cover, and while I love the background and composition I'm not keen on the figure, which is a little too chunky - I think it's that shoulderpad that's unsettling me, coming across as a third breast. And the eye make-up's too heavy. Still, the visual has impact.

If you're looking for a Batman-style character away from the usual Gotham goings on, or a superheroine who doesn't have to flash the flesh to command attention, give Huntress a look.
Andrew Dalhouse DC New 52 Guillem March Huntress #1 review John Dell Marcus To Paul Levitz Sal Cipriano Tomeu Morey