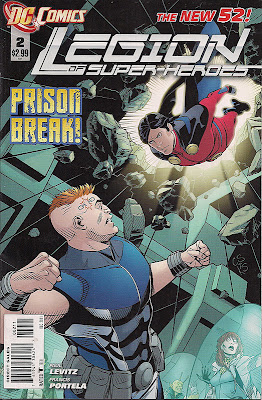 On the watchworld Panoptes, the Legion Espionage Squad has been surprised by a Daxamite. Armed with all the powers of a Kryptonian, the newcomer Res-Vir incapacitates Chemical Kid, Ultra Boy, Dragonwing and Chameleon Boy, and forces Phantom Girl to flee, and hide.

On Earth, Brainiac 5 is assessing new Legionnaire Glorith's mystic shield and barely blinks as it blows up a time bubble - explosions are an everyday occurrence in his lab. It's up to Dream Girl to put out the subsequent fire while Brainy theorises that Glorith may provide a means to travel back to the 21st century. If they can't figure out a way around 'the vibratory changes in the timestream immediately after Flashpoint', seven Legionnaires could remain lost to them.

Res-Vir, meanwhile, explains to the captured Espionage Squad members that he aims to free Daxam from 'United Planets oppression'. As Res-Vir leaves to search for Phantom Girl, the Legionnaires wonder how he's apparently gained access to the anti-lead poisoning serum Brainy makes for the Legion's Daxamite leader, Mon-El.

The intangible Phantom Girl is taking advantage of the Daxamites' inability to see through lead to hide in the floor below her colleagues. She hates the enclosed space but manages to send a distress signal to Legion headquarters on Earth. Mon-El blasts into space in response, while teammates visiting Shanghalla, the last resting place for heroes - Shadow Lass is weeping at the grave of her lover, Earth-Man - prepare to follow. These include Element Lad, whose matter transmutation abilities give him a good chance of taking down a Daxamite, and Polar Boy. Comet Queen is also present, and she reacts badly when the latter shows he's sweet on her.

On Panoptes, Res-Vir addresses a unit of Daxamites; he's not the only one now able to function on planets with lead present. They plan to make enough serum to 'unleash the most powerful world in the galaxy', with the aid of unnamed collaborators. In their minds, they're heroes.

Phantom Girl is taking advantage of Res-Vir's absence to ascertain that her colleagues, especially partner Ultra Boy, are OK. But Res-Vir hears her and attacks, just as Mon-El arrives. The two fight and we see their differing viewpoints - to Mon-El, Daxam's isolation is a good thing as it protects his people from being poisoned, but to Res-Vir it's deliberate oppression. As they fight, Phantom Girl frees Ultra Boy, who rushes to help Mon-El. It's looking bad for Res-Vir, until they glance upwards - and see a massive fleet of hostile spacecraft ...

Not a bad issue at all, this. New antagonist Res-Vir fills his role well enough, though he's unprepossessing - a villain name, an interesting costume, they'd help. As it is, the only visual signature he has is a tattoo on his head which may symbolise his political struggle. A little interest is leant by his name - the Legion fought a villainous child named Ol-Vir during the Great Darkness Saga, a struggle alluded to this issue.

One big question I have is: what are the Legion referring to when they cite 'the Flashpoint event'? I bought the crossover, but how is the finale's universal reset viewed by Brainiac 5 and co? If theories as to the identity of the Mysterious Hooded Woman of the New 52 are correct, at least one Legionnaire is/will be deeply involved.

Phantom Girl disappoints me - one of the longest-serving Legionnaires and all she can do in the face of Res-Vir is hide and send out a distress signal. Then she lets herself go solid while mooning over Ultra Boy in his power-dampening pod, opening herself up to an attack. And to think she got my vote as Legion leader!

I like Polar Boy's gauche approach to Comet Queen, and her over-the-top reaction; it's good to have unpredictable character traits, and skittish is certainly a new one.

In another romantic beat, there's Shadow Lass sobbing over Earth-Man, holding up a team of Legionnaires who are needed elsewhere. This woman was Planetary Champion of her homeworld, she really should be able to compartmentalise more effectively. Or better still, realise Earth-Man wasn't worth many tears.

Credit to writer Paul Levitz, though - there's plenty going on here, and I'm not missing the lost Legionnaires yet. The new recruits help, of course, as does the fact that we get to see Timber Wolf and co in Legion Lost. I'm pleased to see the problem of Daxam raised: why doesn't the United Planet mass produce the serum Mon-El has been using for years? It seems entirely reasonable they're scared at the prospect of an entire world population with the power of Mon-El - especially after that time they were mindjacked by Darkseid and sent rampaging across the galaxy - but their reasoning needs to be transparent.

Francis Portela pencils and inks, providing pleasing layouts throughout. The fight between Mon-El and Res-Vir is a standout, drawn so effectively that Levitz doesn't need to add dialogue. And his facial expressions are great, as evidenced by the Polar Boy/Comet Queen 'romantic interlude' (click on image to enlarge, colouring and lettering by Javier Mena and Pat Brosseau). 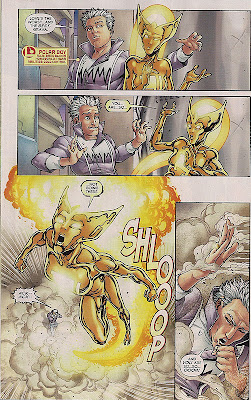 Nineties Legion artists Chris Sprouse and Karl Story drop by to supply the cover, and while the scene chosen isn't the issue's most exciting, I like the minimalist aproach to Res-Vir's features. Mon-El, though, looks like he's floating when he should appear to be zooming towards his opponent.