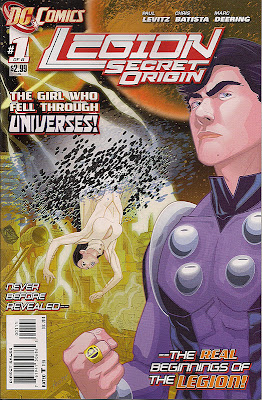 Like Batman and Green Lantern, the Legion of Super-Heroes is a series barely changed by DC's Flashpoint event. With the New 52 experiment bringing new readers to comics, it makes sense, then, to go back and address the origins of the 31st-century team.

As a longtime fan, though, having seen the origin retold and retweaked again and again, the prospect didn't thrill me.

Well, there's a lesson to be learned here, as writer Paul Levitz and artists Chris Batista and Marc Deering bring a freshness to the team's beginnings. Sure, we see Imra Ardeen, Garth Ranzz and Rokk Krinn rescue billionaire industrialist RJ Brande from would-be assassins yet again, but it's entirely right that we should. I want the Legion to find new readers.

Happily, the scene is pithily presented, and viewed from a new angle - rather than being on a star cruiser with the future Saturn Girl, Lightning Lad and Cosmic Boy, we're seeing it through the eyes of United Planets Security Directorate member Anisa who, like all natives of the planet Naltor, has precognitive abilities. She foresees that 'what happens to RJ Brande today will determine the fate of many worlds'.

That grabs the attention of her two colleagues, Zarl Jax from the super-scientific world of Colu, and cynical old Earthman Myecroft. They've been watching as the galaxy hits turning points: the United Planets is launching an experimental cruiser, a wormhole has opened near the planet Anotrom, that world has just been massacred by persons unknown, a strange energy-absorbing device has led the previously distant Coluans to lend out their best thinker Querl Dox, 'the Brainiac child' ... something big is happening and Myecroft doesn't like it one bit.

He especially doesn't like it when Brande brings his three saviours together as a force for good, along with Luornu Durgo from the planet Cargg, whose ability to split into three sees her take the name Triplicate Girl. And on Anotrom, Dox - who has the honorific Brainiac 5 - is spooked by an intangible young woman, Tinya Wazzo of Bgtzl. The future Phantom Girl says she has a warning for the UP.

So there you have it, four Legionnaires in place with two more set to join via a pacy story giving us a closer look at the 31st century without burying us in political background. We're initially told the UP has existed for more than 300 years with many of its worlds seeded by Earthlings, and that's all that's necessary - any other information needed is elegantly dropped into Levitz's breezy script. The only superheroic action is that first coming together of the Legion founders in a wonderfully economic panel from Batista (how I love Cosmic Boy's magnetic SPROING sound effect), but there's plenty going on. The intrigue centred on Myecroft and Brande, for instance - the former willing to kill Brande if expedient, the latter happy to buy off politicians, apparently for the greater good. Then there's the mystery of Phantom Girl's mission, the secret of the energy device, the question of Brande's motives ... There's easily enough fuel here to power this six-issue mini-series, and we've still only really met two Legionnaires - apart from a single line, the three traditional founders and Triplicate Girl are silent, distanced by the narrative. (After this issue I'm wondering if we should consider all six superheroes here founders, as they're coming together at pretty much the same moment.)

Veteran readers may wonder if the massacred world Anotrom is the planet we know as Trom, home to Legion member Element Lad - Trom was wiped out by the space pirate Roxxas, so he could be set for an appearance.

This is Levitz's best Legion work in years, there's a real energy and drive to it; a sense that he knows exactly where he's going, and he's having a ball taking us there.

And in Batista he has the perfect artistic partner - the pencils are clean and modern, the storytelling unimpeachable. The original costumes - designed in the 1950s and 1960s - are updated, with Batista taking his lead from more recent iterations of the characters. I wasn't too sure about them from advance sketches, but in the context of the story, they work - the only one I don't like is worn by Saturn Girl, whose tights have become a tad fussy ... but that's current DC costuming policies for you ('More lines, daahling!').

It's a minor moan; I'm delighted to see the woefully underrated Batista on a prominent project, and he's well inked by Mark Deering. They're especially good at military uniforms, and not just on the red-bereted squaddies - take a look at the clothes worn by Admiral Allon (father of future Legionnaire Colossal Boy), there are actual layers there, a feeling of bulky cloth. Major credit, too, for actually bothering to draw expressive lines on faces rather than depend on the colourist to model them.

Speaking of the colourist, Wes Hartman does superb work, making the 31st century an enticing prospect, while Dezi Sienty's lettering is as clean as you could wish. The cover is provided by Tom Feister, and it's a winner.

Whether you're a longtime fan, or a newer reader intimidated by the Legion's supposedly impenetrable continuity, give this comic a shot - it's a terrific new start for the team.
Chris Batista Dezi Sienty Legion of Super-Heroes Legion: Secret Origin #1 Marc Deering Paul Levitz Tom Feister Wes Hartman