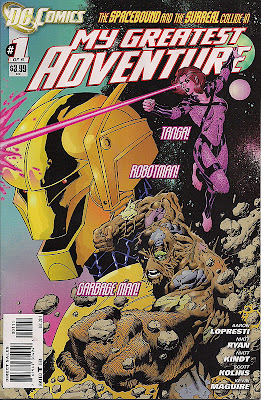 Last year DC gave us the Weird Worlds anthology, six issues of great-looking, flighty fun. Here's the sequel, with two of the three stars of that book back, while the irritating Lobo is, happily, gone.

The first returnee is Garbage Man, the Swamp Man-Thing creation of artist-writer Aaron Lopresti (who provides this issue's lovely cover). As previously, it's an attractive time-passer, as our hero's old secretary pines for him, and the muck monster himself hitches his dirty brown wagon to a homeless priest's vestments. Matt Ryan inks and John Kalisz colours, adding to the lushness of the look.

Then there's Tanga, flighty alien powerhouse, who's something like Starfire when she was Starfire - a bit daffy, but charming. This time, artist-writer Kevin Maguire has her getting into trouble on an alien world. Nothing new there, but the strip looks gorgeous, especially as coloured by Rosemary Cheetham.

And then there's the newcomer, and the best of the bunch - Robotman. A fresh take on the Doom Patrol's Cliff Steele, the clunky gold parts of old have been replaced by nanobots, those atom-sized robots which, in science fiction, can do anything. So now Cliff can change form, allowing him to fly. More importantly from his point of view, he can feel physical things, just as he did before he lost his body. What he can't feel, though, is human.

He acknowledges this, but he doesn't mope. Cliff's opened a detective agency on the outskirts of Las Vegas specialising in weird cases, in a bid to find the adrenaline rush that will make him feel truly alive. By his side is the mysterious Maddy Rouge ... yup, looks like we have here a new take on old Patrol villain Madame Rouge. The original, a shapeshifter, was conflicted: sometimes good, sometimes bad. If this new Maddy is anything like her predecessor she'll certainly add some spice to the mix. She comes with a built-in mystery, which can't be bad.

The story, by Matt Kinot, spends most of its 10 pages setting up Robotman's new status quo, including a nifty base. We don't find out if the Patrol exists, but I suspect the answer to that one is 'not yet'. That's fine by me, DC will likely unveil the full team before long. Meanwhile, I'm happy to see Cliff in the solo spotlight. His first chapter ends in Cuba, where he's hoping to track down the missing Dr Turing (now there's a nice nod to a great Briton). He zooms down by boot jet, Maddy follows by more conventional means of flight, meaning that by the time she arrives - hoping her psychic powers will prove useful - Cliff is already in deep trouble (click on image to enlarge). 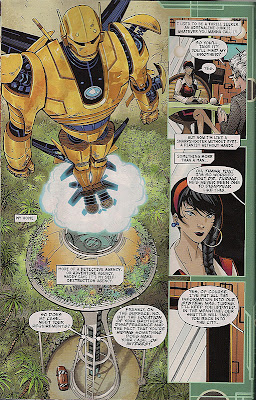 Drawing the strip is Scott Kolins, in a lively style more similar to his Flash work than his more recent JSA look: it's looser, more open and perfect for the adventures of Cliff and Maddy. Adding to the gorgeous look of the pages are the gleaming colours of Mike Atiyeh and thoroughly robotic letters of Jared K Fletcher.

Enjoyable as Tanga and Garbage Man are, I'd happily see the entire book handed over to Robotman - it's already been named in his honour, My Greatest Adventure being the DC comic which debuted the Doom Patrol in the early Sixties. If you've been swithering over whether to try this book, give it a go because even if, like me, only one of the stories grabs you, all three features are by masters of mainstream art. My Greatest Adventure is probably overstating, but A Jolly Decent Purchase can't be bad.
Aaron Lopresti Doom Patrol Jared K Fletcher Kevin Maguire Matt Kinot Mike Atiyeh My Greatest Adventure #1 review Rosemary Cheetham Scott Kolins