Red Hood and the Outlaws #2 review 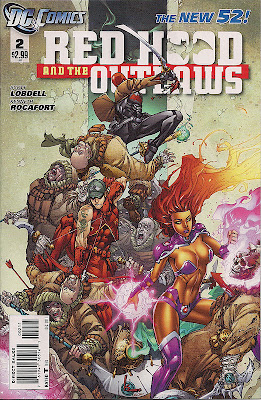 Eighteen months ago, the newly resurrected Jason Todd was taken to a mystical place by assassin queen Talia Al-Ghul and introduced to three thousand-year-old sensei Ducra. She trained the former Robin in ancient fighting techniques and while she didn't knock the arrogance out of him, she won the respect of the future Red Hood.

Today, Jason is on his way from the Caribbean to Hong Kong, having heard that Ducra's realm, The Hundred Acres of All, is threatened. He's accompanied by Roy Harper, the sometimes hero known as Arsenal, and alien powerhouse K'oriander, aka Starfire - but he's not sure he wants them around. After Jason has a run-in with a monstrously large local mobster, the associates travel to the Himalayas, and his old stomping grounds. Ducra is dead, but her spirit tells him to dismiss thoughts of vengeance. Instead he dismisses her now-zombified warriors, once Jason's teachers and maybe 'the greatest people I have ever known'.

The chapter ends with Jason attaining a kind of peace, as he accepts that, like Ducra and her men, he, Kory and Roy are a team.

So the focus is firmly on Jason Todd this issue, as writer Scott Lobdell lays out his past for new readers. Details of his resurrection are glossed over, the point being that Jason felt aggrieved, and wanted someone to pay. Ducra taught him to channel his anger, allowing him to be the man he is today - one able to channel his aggression, a crimebuster happy to live off the profits of the criminals he's brought down.

Roy gets a nice moment or two, and it's good that he's presented as a capable fighter rather than a junkie mess, as has been the case over the past few years. Starfire is a lot closer to the character many of us grew up with than the empty vessel of last issue, showing cool, compassion and the ability to wear more than glorified pasties. The 'sexy moment' this time comes as an air stewardess virtually throws herself at Jason, but it looks like we may have a subplot on our hands.

Having not followed Jason's solo series, I don't know whether Ducra is a new character, but I'm happy that she comes and goes speedily here. She looks like Yoda, speaks like a sitcom Noo Yoiker and despite being half his size with stumpy little arms, can take a former teen wonder out. She talks about the threat that angry young man Jason is to the world but agrees to train him, rather than kick him off a cliff. Nah.

Lobdell's very good at slipping in moments of humour - the title of a rather famous Batman storyline is slipped into Jason's dialogue - without derailing the plot. And I love the colourful incidental characters who drop in, such as the looks-like-a-whale-in-drag Suzie Su. There's also a bit of mystery, with Kory referred to as 'one of the most powerful aliens trapped on Earth', and a sense that Jason is moving forward, as he begins to feel affection for Kory and Roy.

But Lobdell loses a point for introducing the Hundred Acres of All and not slipping Pooh and Piglet in there.

Illustrator Kenneth Rocafort's Jason and Roy are better differentiated facially than last time, while Kory's cheescake factor is dialled right down. The emphasis is on creating a colourful, dangerous world for Red Hood and the Outlaws to inhabit - a world of movement and action, fantastic locations, colourful characters and danger around every corner. The page layouts tickle the eye, with imaginative panels aplenty ... I doubt the jaggedness of many will play well on digital platforms, but c'est la vie, I'm loving the energy.

Blond's colouring pops, especially when our non-heroes disembark an aircraft during a lightning storm, while Carlos M Mangual's letters are just fine. I would, though, like these boys to get together and tweak Jason's narrative boxes - red out of black is tough to read when the font is so small.

It's a small thing in a comic which looks to be going somewhere. If Lobdell and co can keep the emphasis on characters and plot rather than lumpen 'sexiness', this book may have a bright future.
Blond Carlos M Mangual DC New 52 Kenneth Rocafort Red Hood and the Outlaws #2 review Scott Lobdell