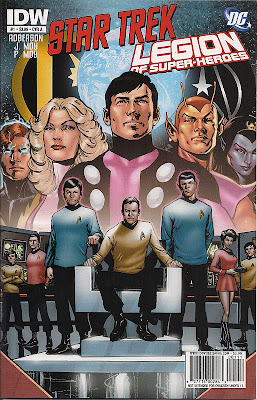 'The time bubble wasn't designed to handle this kind of strain!'

Now there's a Star Trekky line if ever I heard one, but this being a crossover, it's spoken by a member of the Legion of Super-Heroes. Brainiac 5 has been steering team-mates Chameleon Boy, Shadow Lass, Saturn Girl, Cosmic Boy and Lightning Lad back home after a run-in with Darkseid, but a storm in the timestream is cracking the vehicle. The only option is a forced landing.

Elsewhere and when, Captain Kirk and crew are beaming down to San Francisco, where Kirk is giving the commencement speech at Starfleet Academy. Earth in the 23rd century, though, isn't what it used to be - instead of the college, Kirk, Uhura, Spock, McCoy, Sulu and Chekov pitch up in a shipyard for space battleships ... and soon they're being shot at by uniformed heavies on flying platforms.

Nearby, the Legion are having a bad time of it too. In a past which history buff Cosmic Boy doesn't recognise, they're attacked by Earthlings enraged by the appearance of the Durlan Chameleon Boy.

What the Legion don't know, because they weren't privy to the first few pages of this story, is that Earth and the shapeshifters of Durla are at odds. Twisted versions of old DC characters Tommy Tomorrow and Space Ranger are laying waste to Durla for its refusal to bow to the Imperial Planets - a universal body apparently far removed from the Legion's United Planets, or Star Trek's Federation.

The first chapter of this six-issue mini-series ends with the respective away teams realising they're in the wrong universe (duh!). They've not yet met, but when they do it's going to be great if this instalment is anything to go by. For writer Chris Roberson knows his Star Trek, and he knows his Legion - the voices of both sets of characters are spot on. Several seasons of live action TV make it easier to 'hear' the Enterprise crew, but there's likewise not a single off moment with the Legionnaires.

Working with longtime Legion artists Jeffrey and Philip Moy, Roberson finds room for nice character moments - the married Saturn Girl and Lightning Lad display affection; Kirk, who never met a moment he couldn't speechify, claims to be rubbish at oratory; Scotty's fine with staying behind so long as he gets a bottle of Scotch ... and in a nice moment of meta-humour/me reading too much into things, Sulu is practically salivating at the prospect of returning to San Francisco.

Surprisingly, the Moys' Star Trek scenes are better than their Legion pages - they seem more comfortable with Kirk and co than characters they worked with for years (well, a version of, anyway, but let's not get sidetracked by Legion continuity). It'll be interesting to see how the art - nicely coloured by Romulo Fajardo Jr and lettered by Robbie Robbins - settles down when the two heroic crews combine.

The cover comes from Phil Jimenez, another Legion old hand, and again, while the superheroes look good, the Enterprise crew look even better. Maybe comic artists who grew up with Star Trek gain the ability to draw the characters well. Or more likely, it's easier to do a likeness of a real person than a fictional one - the Legionnaires have differed massively in appearance down the years, whereas the Enterprise crew have been consistent.

Ach, I'm boldly going on and on. All you need to know is that both Legion and Star Trek fans are likely going to enjoy this comic. And if you missed it, well, day and date digital means you can beam the issue up right now!
Chris Roberson Legion of Super-Heroes Phil Jimenez Robbie Robbins Romulo Fajardo Jr Star Trek/Legion of Super-Heroes #1 review