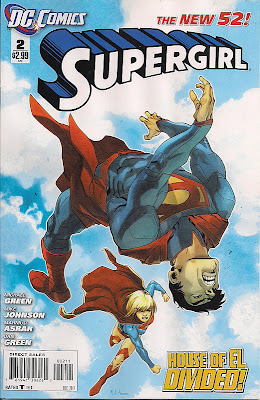 Superman arrives in Siberia to talk to the recently arrived young woman wearing his family crest. She wants to know who this guy is wearing her family crest. And why does he claim to be cousin Kal, the baby she cuddled just three days ago.

Unimpressed by his spoken Kryptonian, Kara Zor-El hits out. Again and again and again. Every time Superman entreaties that she calms down and just talk, she thumps him once more. She's confused after being attacked by super-soldiers last issue, by the newcomer's abilities and claims, and by the onset of her own powers - x-ray vision and flight join the already arrived super-strength and heat vision.

And while the cousins from Krypton battle, the soldiers steal something from Kara's rocketship, before slinking off to their mysterious boss.

Then, when it seems Kara is never going to stop lashing out, something shocks her out of her berserker fugue, and the incident speaks well to her true character.

Like last issue, this is all action, but it's more enjoyable because Kara has someone to interact with. By the end of the chapter she's learned of the destruction of Krypton and why she has powers, knowledge that demands a reaction from her more complex than 'Kara SMASH!' Writers Michael Green and Mike Johnson manage to keep Kara sympathetic even while she's bashing her beleaguered cousin, with a flashback at the start of the story showing us the Kara that was - a young woman with hopes and dreams, and a very real love for her cousin. She's found herself on a different path, but I've no doubt she's going to channel her positive energy in a  new way, while forging a strong relationship with cousin Kal.

Superman still looks like a stranger - weird costume, no kiss-curl - but he acts like the hero I know, opting for non-violence first, only striking back when attacked. Penciller Mahmud Asrar and inker Dan Green do their best, but seem as befuddled by the new look as I am. As for Kara's costume, it's Kryptonian for 'ugly'.

Facially, though, Kara's an angel. Asrar owns this new version of Supergirl, with her sharp hair and big blue eyes. And when he can position Kara so we don't see the costume details, we get a Supergirl who's a direct descendant of her Silver Age self. 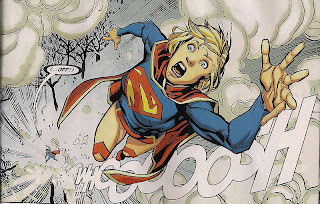 Better than the first issue, Supergirl #2 positions its lead character as one to watch. I think we have a heroine here.
Dan Green DC New 52 Mahmud Asrar Michael Green Mike Johnson Supergirl #2 review