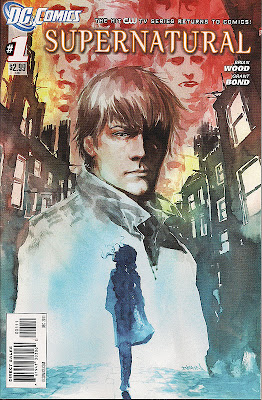 I'm not a big fan of TV tie-ins, but the idea of a Supernatural story set in the city where I live tickles me. After all, Edinburgh doesn't get much in the way of visits from imaginary folk. We had the X-Men fighting Proteus, and Batman turned up as part of The Scottish Connection. That's it, so far as I know. So let's see what Sam and Dean Winchester, monster hunters, get up to.

Sam comes to Edinburgh on an exchange visit, meets one 'Emma of the Isles' while looking up spooky stuff in the National Library, they have a drink and it turns out she's a hunter too, she takes him into the street to see a ghost funeral procession, they kiss and it's super-sexy due to sticky ectoplasm. Or something. End of part 1.

And Dean? Nowhere to be seen.

Blimey, but Brian Wood's story is slight. Took me five minutes to read, and that includes stopping to marvel at Grant Bond's depiction of Edinburgh, which we could charitably describe as 'impressionistic'. 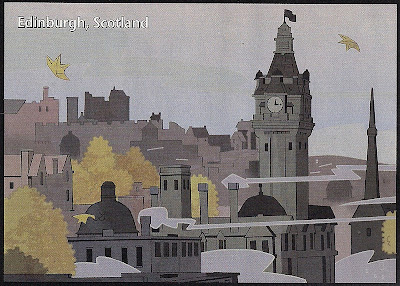 All this time and I never knew I was living in Toytown. I think the image is based on this view. It wouldn't be such a big deal, but the title of this story is 'Caledonia', of this chapter, 'The Dogs of Edinburgh' (Lord knows why, we don't even see the blessed Greyfriars Bobby), so a sense of place is vital. Realistic, evocative, I don't mind, but something. One good establishing shot would be fine, then I could just about pretend that the generic 'British' streets shown here could belong to Scotland's magnificent capital city.

And that's not the only problem with the art, which doesn't reach the standards of Dustin Nguyen's atmospheric cover. Presumably, direct resemblances aren't allowed by DC's licence, excusing the blank, stumpy dude meant to be the 6ft 4in Sam. But when the script describes someone as 'one really incredibly beautiful woman' we shouldn't wind up questioning Sam's eyesight. Even allowing for subjectivity, Emma is, at most, averagely cute (click to enlarge image, and enjoy Sam's arrogant idiocy in the first panel). 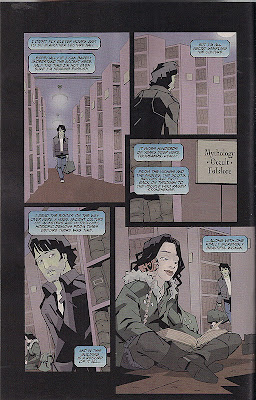 The most effectively illustrated scene is the ghost parade - Bond gives good spectre ... gnarled souls, more haunted than haunting. A solitary ginger beard apart, this is the only point at which Bond, doing full-colour art, brightens his palette, showing us that Scottish ghosts are an eerie blue; the rest of the book is all murky purples, greens and browns, whether we're indoors or out.

Of course, Bond could be giving us exactly what Wood asked for. Given that the script is so slow - what we have here would barely fill the space before a TV episode's opening titles - it's entirely feasible he asked for drab colouring so as not to overexcite the reader.

Sam's voice is captured pretty well, though he seems a bit dumber than on the goggle box, being amazed that Edinburgh might have ghosts, and fine with the notion that the first person he meets is a hunter (or as Emma terms the job, 'breaker'). And Emma is incredibly annoying, constantly using Sam's full name, like some lunatic refugee from Brigadoon.

The story starts and a few pages in there's a 'three years ago ...' caption, leading me to spend the whole issue thinking we've had a framing sequence followed by a flashback - Sam came to Scotland three years previously, met Emma and has come back due to unfinished business. My mate Steve read the story the same way.

On further consideration, it seems that the whole issue is set in the past ... couldn't Wood have told us this on page one? The time frame is presumably to put the story before Sam entered the family business - the narration mentions that he's still at Stanford University. Well, that might explain his naive manner. Did anyone actually know the seven seasons have been contracted into less than three years?

But if we're not setting the book in current continuity, why not just choose to have Dean in there? It's not Supernatural without Sam and Dean. Maybe the older Winchester brother will show up next issue but I won't be around to find out; this comic was just too unsatisfying, even as an instalment of a larger story.
Brian Wood Dustin Nguyen Grant Bond Supernatural #1 review