Wolverine and the X-Men #1 review 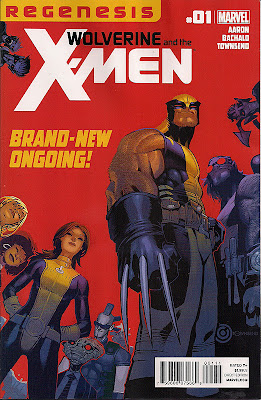 In the spirit of the recent Daredevil relaunch, here's a Marvel title that puts fun first while honouring its characters and tradition. And tradition is at the heart of this book, as Wolverine rebuilds Professor Charles Xavier's School for Gifted Youngsters and christens it the Jean Grey School for Higher Learning.

At Logan's side are Kitty Pryde as headmistress, Beast as Vice Principal, Iceman handling accountancy, Husk in charge of literature ... they may not have a teaching certificate among them but the students certainly won't be bored.

For one thing, everyone expects the new school to get blown up a lot by enemies. With the facility being designed by Beast as an architectural blend of Westchester Gothic and Shi'ar Modern, though, there'll likely be excellent defences. The biggest threat to the students may be the school itself - the building is threaded with Danger Room tech, as Hellion and Glob are less than thrilled to find on a trip to the bathroom.

But if they're having a bad day, Logan and Kitty are having a worse one, as they show a pair of rightly dubious school inspectors around in a bid to gain accreditation. If it's not rampaging inter-dimensional gremlins it's an attack by an earthquake creature ...

Then there are the students: as well as Idie insisting that she and the other kids are monsters, and the sociopathic Quentin Quire, there are newcomers such as little boy Brood, Broo and Shi'ar prince Kid Gladiator.

This is a ridiculously entertaining first issue, with the only negative being the arrival of Kade Kilgore, new Black King of the Hellfire Club, arriving to throw down the gauntlet. The 12-year-old snot tells Wolverine he's going to destroy his dream while waging war on mutantkind - and Logan puts up with it. I get that he's on his best behaviour due to the presence of the inspectors, but it's a shame we don't see him planning to sic psychic Rachel Summers (specialisms: Brain Spelunking, Outer Space Survival Skills, Downloading Foreign Languages and Psychic Self-Defence) on him. I get the distinct impression that Kade and his Hellfire Creche (© Me) are going to be a constant thorn in Logan's side. Which is bonkers ... there's no way a bunch of non-powered kids could out-think a team of experienced super-heroes - Kitty Pryde and Beast alone are meant to be certified geniuses.

We'll see - given the level of imagination writer Jason Aaron shows in this debut issue, he'll likely surprise us by having Kade eaten by Toad next issue. Aaron really is on top form here, giving us a gag a minute - even Professor Xavier shows a nice line in sarcasm - without letting us forget that the new school means everything to Wolverine. He's training the next generation of gifted youngsters in survival skills, while honouring the woman he loved, Jean Grey. The mix of characters is first class, guaranteeing I'll be back for future issues. 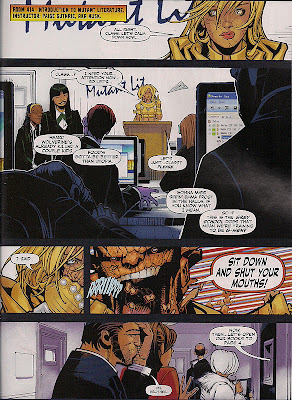 The artwork - pencils and colours - of Chris Bachalo helps too (click to enlarge images). While I wish he'd keep everyone a little more on model (Kitty Pryde looks like a boneless version of Psylocke; Kade, about 18 years old rather than the stumpy kid he was last month; Iceman like, I have no idea, but it's not Bobby Drake), Bachalo is one of comics' great stylists and this book is lucky to have him. Every panel is fascinating to look at, filled with delightfully expressive characters; it's just wonderful cartooning. Backing Bachalo are inkers Tim Townsend, Jaime Mendoza and Al Vey, and letterer Rob Steen.

As well as the 28pp story, this $3.99 book offers a couple of sweet, funny features - that's the way to do it, Marvel! Production editor Irene Y Lee designs a smile-inducing set of mini-men outlining the school faculty and student body, then shows us the list of classes offered, some of which I mentioned above. It's terrific work from one of the rarely sung heroes of the Marvel office. The second feature also shows us the school logo, designed by Manny Mederos, complete with the motto: 'The best there is at what we do'