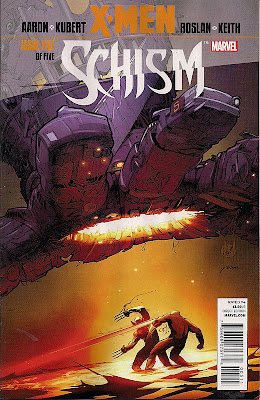 The most fearsome Sentinel ever is trudging towards Utopia and all Cyclops and Wolverine can do is attack one another. Admittedly, the former is trying to stop the latter from blowing up the godforsaken rock that has become the 'mutant homeland', but the fight's about more than that; it's the culmination of the philosophical gulf that's been widening between the pair over the course of this five-issue mini-series. It's the war over who was loved the most by a long-dead woman.

With the common goal which forced them to put aside their massive personal differences gone, of course these two fight - Logan is a scrapper by nature, while Scott has been twisted by his siege mentality. That they should keep fighting even when the Sentinel reaches the island rather than work together is tougher to stomach - I suppose it's not just Wolverine who can have 'berserker rages'.

The two most senior X-Men only pull themselves off one another and take aim at the giant robot when a pack of younger mutants - the Generation Hope and New X-Men kids - appear and attack. And they win, pummelling the Sentinel to bits.

Not that the people behind the attack - the Hellfire Creche - care. The incident has shown the mutant-hating Rest of the World that the new Sentinels are worth investing in ... and guess who has the patent?

For the X-Men, more cataclysmic than the giant robot tussle is the aftermath - Wolverine can't take it any more, he's leaving Cyclops and Utopia, and he's not alone. A group of younger X-Men have also had it with Cyclops' aggressive stance, and apparently wish to honour Charles Xavier's original dream of integration, not isolation. (I was excited to see Iceman on board the Blackbird too, but I suspect he was merely acting as chauffeur, and is returning to be one of the monkeys on Cyclops' little Gibraltar. Darn, I'd love Bobby Drake to get an important role in an X-Men book for once, and if he were one of the few senior X-Men in the coming Wolverine and the X-Men title, he'd be just that.)

Schism has been the best X-Men event in years, a short, sharp shot to the system; deftly written by Jason Aaron (and, in Generation Hope, Kieron Gillen) and superbly drawn by a cadre of artists. This issue we have Adam Kubert on pencils, which is always a treat.
There's a real intensity to his fight scenes, with an obvious throughline from his father, the brilliant Joe Kubert. Kubert Jr gives us Cyclops, Hope, Wolverine and Irie attacking a Sentinel, but it could as easily be Kubert Sr's Sgt Rock and the Combat-Happy Joes of Easy Company taking down a Nazi tank (click on images to enlarge - Our Army at War cover borrowed from the superb Grand Comics Database - let me know if I'm nicking bandwidth, chaps!). The determination in the body language, the grim set of the eyes - Adam Kubert has an X-gene of his own, but by cracky he's worked to hone it.

And it's not 'only' the figure work: the page compositons also help the story hugely - fractured panels to reflect the ideological spat between Cyclops and Wolverine, tiny and numerous for quick pace. And then big, splashy images as the greater conflict can no longer be denied.

Huge credit too, to Mark Roslan, whose digital inks add a richness to the linework, and Jason Keith for a fiery colouring job. The only negative so far as the art package goes would be a spread of panels drawn across the fold, but that's minor.

The book ends with Wolverine and company at the place he's chosen for their new home - the demolished Xavier's Home for Gifted Youngsters in Salem Centre, Westchester County. It's a spot with memories good and bad for Logan, and the perfect place to begin his own dream for the future of mutantkind.