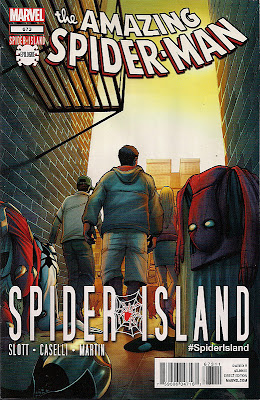 Manhattan's tenure as Spider Island is over. Having been given Spider-Man's abilities, then transformed into giant arachnids, virtually the entire population is waking up after the cure with a fuzzy memory ... and a distinct lack of clothing (click on image to enlarge).

So there's no better name for this epilogue than The Naked City.

Happily for the New Yorkers, they don't have to display their big apples for long; superheroes are on the scene with trousers aplenty.

Having shown with Spider-Island that despite the evidence of Fear Itself, Marvel can still do satisfying big events, the Amazing Spider-Man team demonstrates that they can do epilogues too. This issue is crammed with little codas to the storyline, and pointers to upcoming events. There are turning points in Peter Parker's relationships with former partner Mary Jane Watson and current girlfriend Carlie Cooper; new plots hatched by mad scientist The Jackal; clone Kaine sets off with one of Peter's hi-tech suits to strike out on his own as a super-hero; Eddie Brock, who gave up his Anti-Venom abilities to facilitate the cure, is New York's big hero; J Jonah Jameson makes a decision; Madame Web delivers an annoyingly cryptic warning (nothing new there!); and Peter learns that in rallying the good people of Manhattan to help out in the previous days' crisis, he's weakened a certain spell cast by Dr Strange.

It's all go in Amazing Spider-Man, and all entertaining. Writer Dan Slott has a tremendous handle on the tangled web that is Peter Parker's life, and a whole issue exploring it without the noise of  a super-villain battle is a treat. Peter's days have been pretty good of late, what with being on two respected super-teams, having a fulfilling job and dating one of New York's Finest, so he's due some of the old Parker luck. And while he gets understandably angry as things go south, he keeps his priorities straight, and he doesn't wallow.

Artist Stefano Caselli interprets the script beautifully. Compositions, figurework, backgrounds - they're all strong and work together to ground the story physically and emotionally. The colouring by Frank Martin is note perfect, with the first Peter/MJ chat a masterclass in lighting a scene for the time of day it's set - in this case, morning. Storm, appearing in one panel, looks distinctly Caucasian and I really hope the moment doesn't inspire a slew of articles yelling 'racism'. Ororo's such a big name character that there's no way Martin will have gotten it wrong; it's a glitch. Luke Cage and Robbie Robertson also look far lighter than they should, backing up my feeling. On the lettering side, Joe Caramagna turns in his usual fine job.

And the cover? A cute, appropriate take on a classic by Caselli, marred only by the massive, unnecessary Spider Island title lettering and baffllingly prominent hashtag.

I'm not a fan of the $3.99 price tag of this comic, but while Slott and co only have 22 pages to play with, editors Stephen Wacker and Ellie Pyle look to have sent out a memo instructing creators to pack them with story - Spider Island chapters have been dense, rewarding reads. And so long as that's the case, I'll keep buying.
Amazing Spider-Man #673 review Dan Slott Ellie Pyle Frank Martin Joe Caramagna Spider island Stefano Caselli Stephen Wacker