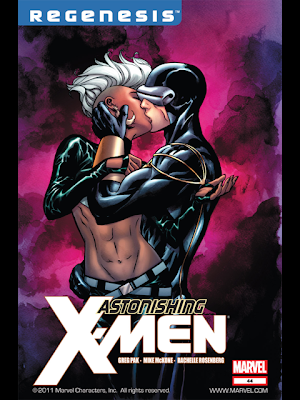 It's been a rough few weeks for mutant leader Cyclops. Wolverine has decamped for Westchester with half the population of Utopia, leaving Scott Summers with a team of morally dubious characters to wrangle. Scott's physical recovery following a knockdown, drag-out fight with Wolverine is progressing well, but mentally and spiritually, he's in a bad place. Blasting apart the lockers of lost lieutenants Wolverine, Kitty Pryde and Beast would be our first clue.

Resident maddish scientist Dr Nemesis reckons it may simply be an oncoming storm that's making the permanently broody Scott extra-irritable. And a storm does indeed arrive - or rather, a Storm. Ororo Munroe, mohawked, magnificent and mischievous. Spotting that Scott needs breaking out of his funk, she greets him in the time-honoured Marvel superhero manner - with an attack. Scott rises to the challenge, using his powers in new ways, impressing watching Utopians and cheering himself up immensely.

Soon the pair are teaming up to take down Sentinels in Santo Marco, and their easy success leads to this issue's intriguing cover scene. It's the married Ororo who instigates the kiss, and while any resistance looks to be passive at best, Cyclops protests.

This isn't the Storm he knows, as becomes very obvious when he wakes up somewhere else, in a very sticky situation ...

With so many X-books being relaunched right now, the question arises: what is Astonishing X-Men for? Uncanny X-Men covers the quest for mutant equality, Wolverine and the X-Men re-establishes the school for gifted youngsters, Uncanny X-Force handles black ops. And so on - every title has a defined purpose, leaving Astonishing as the X-book without portfolio.

Incoming writer Grek Pak looks to have concluded that this is the perfect place for a spot of character building, and Cyclops is the lucky man. Good choice - Scott's been a miserable git, the authority figure who can't afford to lighten up, for years now. Giving him a mission away from his team lets him show just what he can do on his own; when he's not worrying about leading, or political agendas, or the safety of his fellows. The mere fact of having Scott use his force blasts in different ways this issue - pulses aimed at the ground to alter his momentum mid-air, blocking Ororo's lightning with his beam - makes him a little bit more interesting - he's growing. And his subsequent euphoria makes Scott more human, more likeable.

And we're also getting an alternate world story, one that reminds me of the glory days of the Exiles series. After this issue's climax, there's no way I'm missing the rest of the arc. Truth be told, though, I was sold on this storyline, Exalted, by the time we got to Santa Marco, scene of the X-Men's first encounter with the Brotherhood of Evil Mutants. It may not be relevant in the larger story, but fun nods to the X-Men's rich past equals extra value, and the quality of characterisation here is a joy to see. As well as Scott starting a journey, there's Ororo, refreshingly devil-may-care, but not so different to the Storm we've occasionally seen that it couldn't be 'our' weather witch. It's not like she hasn't changed her hair previously ...

And then there's the artwork. Mike McKone produces probably the best Cyclops since the days of John Byrne and Terry Austin - it's something about the way he draws the ruby quartz visor, it just is Scott Summers. And his Storm has the beauty, grace and strength Barry Windsor Smith gave her.

Not that this is a book of homages. He channels the sensibility of his predecessors, but McKone's way with a page is all his own. There's a rare dynamism to the book, as panel arrangement on the page and action within the frames work together to carry us from beginning to end at the right pace. Splashy panels give the big moments the weight they need, but the quieter points are never undersold.

McKone's artistic partner is Rachelle Rosenberg, a very gifted youngster indeed. The pages have a gorgeous vibrancy, none more so than the interior version of that Scott/Ororo 'moment', as blazing, exploding Sentinels contrast with that tender kiss. Fine letters, too, from Cory Petit.

Marvel solicitations call this 'the biggest, most exciting X-Men story in years'. Time will tell. For now I'm happy with 'one of the best comics I've read this month'. Because it's been a very good month.
Astonishing X-Men #44 review Cory Petit Mike McKone Rachelle Rosenberg Sentinels.