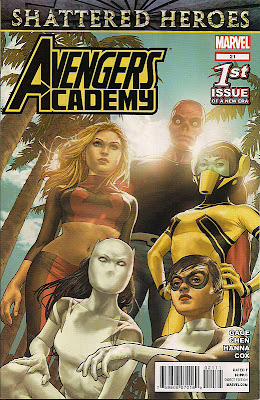 It's a new term at Avengers Academy. The Fear Itself crisis saw their interdimensional headquarters, Infinite Avengers Mansion, destroyed. One student, Veil, quit after feeling forced to kill in battle. Teachers Speedball and Justice resigned to go on a road trip.
Relocating the Academy to the old Avengers West Coast Compound, headmaster Giant Man takes the opportunity to open the doors to new students. He reckons the current class - Hazmat, Finesse, Mettle, Reptile and Striker - will benefit from contact with other super-powered kids. Ones who weren't tortured by Norman Osborn, and aren't at such high risk of winding up as super-villains.
So it is that the likes of Butterball, the teen She-Hulk and (randomly annoying spelling alert!) Juston Seyfert and his pet Sentinel are having a whale a time by the pool at the renamed Avengers Campus. And as the new kids play, the existing students train. And seethe. And worry.
Like a child with a new baby sister or brother, they fear they're being usurped, that the Avengers will kick them out to embrace the new kids with their lack of baggage. Cue a raging argument with visiting Avengers Captain America, Luke Cage and Hawkeye which leads to fisticuffs. The incident ends only when faculty member Jocasta makes a rather insistent plea for peace.
The Avengers explain that rather than dispense with the current group, they want to provide one-to-one mentoring, but their display of aggression has the older heroes wondering if the kids are indeed worth bothering with. While everyone calms down something happens that is sure to bond the generations - the apparent murder of one of their number. And that's not the only surprise this issue has before the end.

Hmm, should I even mention that there's a second surprise? You're perhaps less likely to be surprised if you're expecting a surprise. But on balance, I'll stick with the previous paragraph - even knowing something's coming, it's not something that can be guessed, the surprise will hold. I'm hoping to persuade anyone who hasn't yet tried this book to give it a shot, and intrigue always helps.

This really is one of the best comics Marvel puts out, packed to the gills with fascinating characters and situations that change and grow from issue to issue. It also features some of my favourite Avengers as teachers - along with Giant Man there's Tigra and Quicksilver and, as of this issue, another longtime team member. Plus, the core class is joined by Julie Power, aka Lightspeed from Power Pack aka, according to Hazmat, 'Double Rainbow Barbie'. And this month's version of the White Tiger, Ava Ayala, steps in to add a few sparks.

Christos Gage is one of the best plotters in comics and his scripts are brimming with character and his love of classic Avengers lore. One favourite scene this time has killer robot Ultron characterised as a deadbeat husband to Jocasta ('she claims she hasn't heard from him in months'), while Hawkeye's earliest arguments with Cap see him sympathetic to the trainees' frustrations and rudeness. All this and the kind of twisted teen romance that's a log way from Riverdale.

The pencils of Sean Chen are deliciously clear, and sharply finished by Scott Hanna. The pair do a fine job of telling the story visually, handling a couple of dozen individuals without making the pages seem cluttered. And the bright colours of Jeromy Cox and Veronica Gandini, and clear lettering of Joe Caramagna, are always appreciated. Rodin Esquejo joins the comic as cover artist and produces the perfect image to ring in a new era. I've no idea what the post-Fear Itself banner, Shattered Heroes, refers to, but the '1ST ISSUE of a new era' blurb is just clever marketing.