Batman: The Brave and the Bold #13 review 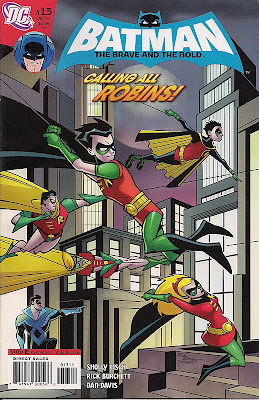 Mystical man of mystery the Phantom Stranger gathers Robins past, present and future to save the Batman, riddled by bullets after an incident in Crime Alley. Can Dick Grayson, Jason Todd, Tim Drake, Stephanie Brown, Damian Wayne and Carrie Kelly revive Batman ... or will it be a case of 'Batman Dies at Dawn'?

Longtime readers will recognise the title, and the Phantom Stranger's splash page posing with a comatose Batman, as a homage to one of the most-famous stories of the Silver Age, Robin Dies at Dawn (Batman #156), but that's where the similarities end, as this issue strikes out into new territory. Can the most experienced Robin, Dick - here in his Nightwing guise - wrangle his very different successors long enough to save their mentor?

Of course he can, but the lack of suspense in this area is more than made up for by the joy of watching such little-seen Robins as The Dark Knight Returns' Carrie, and short-lived Steph, fight alongside one another. The solution is one that a fair few readers will see coming, but there's a satisfying twist, followed by a delightful coda. 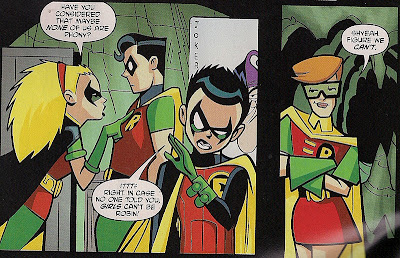 It's another superb issue from writer Sholly Fisch and artists Rick Burchett and Dan Davis. Differentiating Boy, Girl and Teen Wonders with dialogue and fighting styles, they demonstrate that when Batman takes on a new Robin it's never a case of trying for a Dick Grayson clone. Rather, it's Batman tweaking the Robin role to fit the personality of the occupier (click to enlarge image).

As ever, a cleverly worked plot is studded with gems of dialogue - it's no wonder Grant Morrison has had Fisch assigned to the role of back-up writer in Action Comics, after naming Batman: The Brave and the Bold his favourite comic. Glad it's not just me! As well as the main action, there's a prologue with Nightwing teaming up with Speedy to fight the Royal Flush Gang, shortly after Dick graduated to the role of adult hero. Suffice to say, the teen archer's not impressed with the new look.

If you've yet to try this book, here's another chance. With luck, Morrison's patronage will bring in new readers and ensure a healthy run for the only series currently embracing the full delights of DC Comics' seven decades-long library.
Batman: The Brave and the Bold #13 review Dan Davis Grant Morrison Nightwing Rick Burchett Robin Sholly Fisch