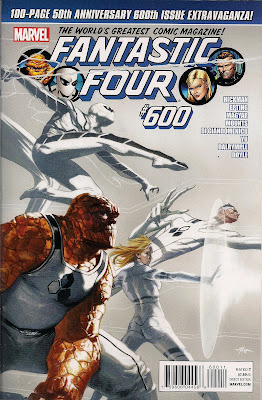 It's anniversary time, as the Fantastic Four celebrates 600 issues and 50 years. You likely know that we've never seen issues #589-#599, with the series restarted as FF earlier this year after the FINAL ISSUE that was #598. You likely never believed that claim and didn't believe Marvel expected you to believe it.

Just as no one believed that as of the previous issue, Johnny Storm was dead. And he wasn't. But then he was ... we'll get to that later.

The 100-page book is split into five connected stories, all written by Jonathan Hickman, so let's look at them one by one.

First off, the Future Foundation - Mr Fantastic, Invisible Woman, the Thing and Spider-Man - rally the Avengers to stave off a Kree invasion of New York. There are several superb moments, the best of them - in terms of action and dialogue - involving Sue Storm Richards, de facto leader of the team in her husband's presence (click on image to enlarge). The Thing goes looking for girlfriend Alicia in SoHo and fights a Kree Sentry alongside Red Hulk and She-Hulk (the real one). Reed, though, doesn't do much other than subtly dismiss Spider-Man's brainpower - they're both geniuses with maths and science, but whereas Spidey has humility, Reed Richards is all hubris - only he can run the figures that will keep the Kree at bay. So it's Spider-Man who breaks away from the throng and winds up fighting the horde of Annihilus in the Baxter Building - he's too good a soul to hang around and argue that it's Mr Self-Proclaimed Fantastic who should be checking on his children.

Said kids Franklin and Valeria are front and centre as the Future Foundation class proves endearingly competent before blasting off into a subplot. And the Avengers get a good showing courtesy of Hickman's sharp script, with Ms Marvel and Red Hulk's knowledge of military tactics proving useful, while Iron Man - yet another Marvel Universe hyper-boffin - combines skill sets with an FF member to save Manhattan.

No, not Johnny Storm, he doesn't show up until the final splash, in the last of 28 gorgeous pages illustrated by penciller Steve Epting, inker Rick Magyar and - celebrating his 100th Fantastic Four assignment - colourist Paul Mounts. Their scenes of New York under siege are glorious, and if there's a person in the Marvel Universe this trio can't make look superb, I've ... hang on, the Kree Supreme Intelligence is in here, still looking like Lockjaw's greener brother.

It's the SI who ordered the attack on Earth. He has his own complicated reasons but I shan't dwell on them as they're connected to that mecca of boredom, the Inhumans subplot which filled/killed two issues of the FF book recently. Really, they boil down to 'destroy all humans'.

The second story spends a great deal of time - 48 pages - showing us what Johnny Storm's been doing in the Negative Zone since his 'death' in Fantastic Four #587. Refusing to help Annihilus break through to Earth saw him thrown into a painful cycle of death, rebirth and gladiatorial games. Finally he persuades his fellow prisoners - another dull batch of Inhumans - to break free, putting him in a position to return to Earth.

Hickman writes a terrific Human Torch - brave, stoic, inspiring - but goodness, does this story drag on. Carmine Di Giandomenica draws in a pleasantly loose style, somehow managing to make the kiddie Annihilus imposing and scary, as the monstrous ruler of another dimension should be. He also makes the most of some memorable images gifted him by Hickman's script, such as what passes for medical stitches in the Negative Zone. The colour work of Andy Troy lends a pleasingly unearthly touch to proceedings.

Next up, it's off to the Inhumans' home of Attilan as Madame Medusa and husband Black Bolt have a head-to-head. Literally. They meld minds as he bids to persuade her to put up with the horde of butt-ugly extraterrestrial 'wives' he's suddenly taken on. 'I did not choose this,' he bleats, apparently in thrall to the SI. She agrees to accept her 'sisters', which is as stupid a move as you'd expect from a woman content to spend her life as a glorified Speak & Spell machine.

I think this is the first time we've seen how the couple communicate, and as visualised by Ming Doyle and colourist Jordie Bellaire, it's engaging. But every night I pray Hickman will get over his obsession with Inhumans politics or move it over into some other book - Marvel Double Filibuster, anyone?

There's more weird alien communication in a brief strip showing Reed and Sue having a cosy chat with Galactus. The Devourer of Worlds gives them a Magimix Cosmic or somesuch to save the planet from some undefined future threat. Maybe the one at the front of the book, I have no clue. Galactus wants the Earth in one piece so that he knows the whereabouts of a 'Galactus seed' - likely to one day spawn a usurper to his role as Force Of Nature With Surprisingly Good Conversational Skills. It's an OK short, but indicative of Hickman's over-cerebral approach to the Fantastic Four, showing us pieces being placed on the playing board in advance of their being needed, rather than having the heroes find and grab 'em at breakneck speed mid-story. Still, we do get the beautiful pencils and inks of Leinil Francis Yu and Gerry Alanguilan, and colours of Javier Tartaglia. An extra layer of visual interest is added by letterer Clayton Cowles, who makes Galactus' word balloons suitably otherworldy. 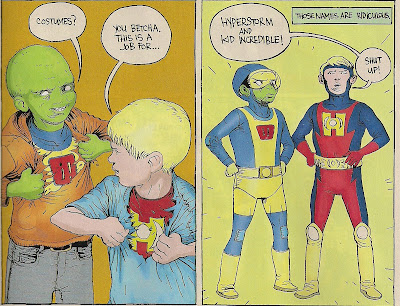 There's more plot-seeding in the final story, as Hickman delivers an intriguing script allied to a cute gimmick - Franklin's eye-view artwork courtesy of Farel Dalrymple and colourist Jose Villarrubia. The naive approach suits the story to a tee. Ages ago, a future version of Franklin Richards reignited the godlike powers of his younger self. We see that since then, young Franklin and mutant pal Leech have been visiting a brand new Earth he's created inside a closet. At the end of the story, a whited-out figure appears and basically offers to visit daily and train him to be a god ... Asked who he is by Franklin, the figure replies: 'Just consider me your biggest fan.' It could be Older Franklin again, but Franklin's already met him, so why blanch him out? The beard and physique hint at the Wingless Wizard, but the head dome should be bigger. I'm getting flashbacks to someone drawn by John Byrne, but can't place the memory ... anybody?

So, lots going on in this massive comic, most of it entertaining, some of it exceptional. I'd say that in terms of today's market, you get your $7.99 worth - if you want a big, fat issue of the upstart FF. But as this issue sees the return of the Fantastic Four title (FF is continuing as a separate series), I'd like to have seen the focus firmly on Reed, Sue, Johnny and Ben as a team, working together to save the day. Instead, the focus is all over the place as Hickman continues to give us seemingly all his Fantastic Four stories at once. Hopefully, with two books the kitchen sink plotting will settle down and the pace will speed up somewhat.

Meanwhile, this is a decent anniversary issue for fans of Hickman's FF run, filled to the brim with colourful characters and Byzantine plotting. Sadly, with only 100pp to play with, a conclusion was too much to hope for.
Carmine Di Giandomenico Fantastic Four #600 review Farel Dalrymple Gerry Alanguilan Leinil Francis Yu Ming Doyle Paul Mounts Rick Magyar Steve Epting