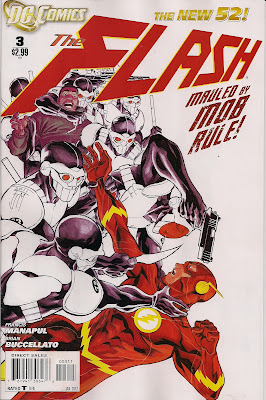 As openings go, Flash #3 has a winner. Barry zooms up into a plunging plane and vibrates it through a Central City bridge and on to the surface of the river below, saving many lives. It's not easy for him, but he manages it due to his newly activated speed-thinking. He's now able to take in all the information around him, extrapolate possibilities and choose the right course of action. Sounds neat, eh?

The plane falls due to a blackout-causing electromagnetic pulse over Central and Keystone Cities. That means a busy time for Flash both in and out of costume, as he bids to save as many people as possible from harm in his super-hero guise, and aid his police department colleagues in his civvies. Being released from the lab gives Barry and gal pal Patty Spivot a chance to search for Barry's missing friend Manuel and investigate his connection to the pack of crooked clones known as Mob Rule.

They find Manuel - well, most of him - but are spotted by the villains. Barry manages to push his friends on to the street and to safety, giving him a chance to turn on the super-speed and save the day. With speed-thinking, it should be easy.

Flash #3 is another home run from writers/artists Francis Manapul and Brian Buccellato. While Barry is, rightly, the focus of the story, they make room to show how reporter Iris West, and boffin Darwin Elias, work the same case. The former is trapped inside an Iron Heights cell with Captain Cold (looking older and colder, his power internalised), but safer with him than in the corridors where prisoners run wild; the latter bumps into the teenage Trickster, a couple of mystery men, some Mob Rule goons and a tank from last week's Flash-guesting Captain Atom #3 (or so an editor's note tells us - there are tanks in there, but the connection is far from obvious). We also find out a little more about the plausibly sounding mad science behind Manuel's one-man army. Let's just say: oink.

It's a packed issue, typically good-looking with artwork that demands to be 'read' at least as closely as the words on the page - especially in the shocking climax which shows that Barry's newest ability isn't quite the boon it seems.

We hear about Barry's other super-speed tricks in the opening sequence, a smooth-running blend of script and art that helps us get to know the speedster better. The writers have found an appealing voice for Barry, something he's not had in a long time.

The one tiny bump in the visuals is the opening graphic, which lays the hero's name into the cabin of the jet. There's not enough room for a full wingspan, and so much going on - a visual of passengers and crew, the super-size logo treatment, colour blocking - that it's not terribly apparent that we're looking at a plane. But I love that Manapul and Buccellato are striving to give their book a unique visual identity, the foreground figure of the Flash is stunning and they've slipped in a freehand version of the Seventies DC Comics cover font, tickling my nostalgia noodles. 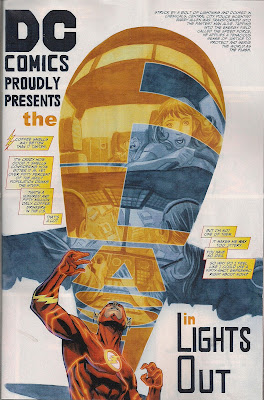 And as implied, the other 19 pages are pretty darn great, with Manapul's illustrations and Buccellato's tones pulling us into the story, emphasising the most relevant information ... and sometimes just giving us a fantastic visual, such as Barry and Patty playing mounties on the streets of Central City, or Flash running across two pages. Every character is distinctive, every scene has its own flavour.

There are lots of great DC New 52 books, but none so successfully rethink how super-hero script and art can blend for the better. The experimentation makes for a ridiculously fresh reading experience. Buccellato and Manapul are going to win readers and awards alike with this series, and they deserve them all.