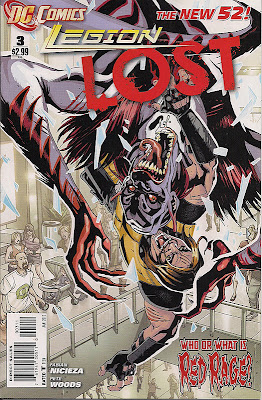 Good Lord, what a horrible creature on that cover.

It's Dan DiDio in an OMAC tee shirt!

Kidding ... well, not about DC's co-publisher, there he indeed is, just above the barcode. But I mean the monster Timber Wolf's fighting. It's one of the alien/human hybrids created by the Hypertaxis Plague released by 31st-century terrorist Alastor into the 21st century. And it's out for blood, hunting and killing other victims of the virus.

The why is revealed on the final page, but before that we see Timber Wolf, this issue's narrator, steal a police car as he tracks down the killer. Teammates Tellus and Dawnstar are using their telepathy and tracking to find other victims of the plague, while sonic boomer Tyroc and energy being Wildfire attempt to rebuild their disabled tech.

It's another improved issue of the new Legion of Super-Heroes spin-off, building the momentum and continuing the character work. It also adds a couple of new mysteries to the storyline - as well as the nature of the killer's quest, there's the identity of the woman glimpsed by Tellus on a telepathic sweep. It seems she's keeping tabs on the virus too, could she be connected to the Metacontrol organisation referred to by an air traffic controller left in Dawnstar's super-speed wake?

We also see Timber Wolf using his heightened senses in a disgusting, but effective, way, prior to a blisteringly good fight scene that ends when the hero gains a surprise advantage.

Other good moments include glimpses of 'native' DCU heroes during Tellus' mental recce, and the Legionnaires' difference of opinion over whether they should ask them for help. Then there's the ending ...

Read DC's publicity for this issue and you learn that the killer beast is named Red Rage, a fact not made clear in the story, though it is the name of the chapter. More interestingly, we're meant to learn the answer to the question: 'What secret does Tyroc hide in plain sight'? After several reads, all I can say is: beats me. The goggles that seem glued to his forehead finally cover his eyes, as he works on the knackered tech, so perhaps he's short-sighted. Shocking.

Anyone? Or is this a case of Solicitation Gone Wrong? 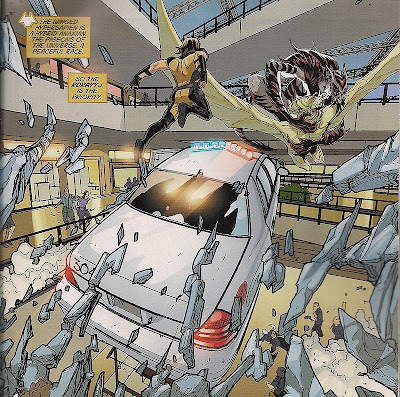 What hasn't gone wrong is the story and art. Fabian Nicieza's script is a fine balance of searing action and quieter moments, peppered with sparky dialogue. Pete Woods' illustrations get stronger by the month as he makes the Legionnaires his own. The scene in which Timber Wolf smashes into the mall, leaping from a police car at, yeah, Red Rage, is outstanding. And every page is superbly coloured and lit by Brad Anderson (who also tones that great Woods cover), and lettered by Travis Lanham. The whole creative team - and that includes editors Darren Shan and Brian Cunningham - is really gelling, having taken this book from ho-hum to hoo-hah in just three issues.