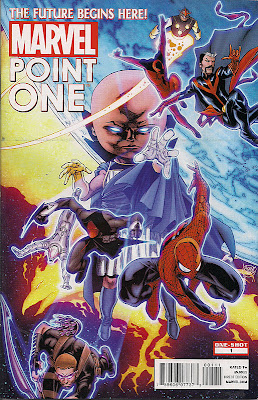 Every three years Uatu, Earth's Watcher, takes a break. For 42 minutes he uploads memories to the Watcher Collective, leaving the 616 Universe occupied by Marvel's heroes unobserved. This provides the opportunity for dodgy scientists to sneak around the Blue Area of the moon and look into the 'wall of memories', portals into other universes - a What If? Wall, if you like. This sequence - efficiently scripted by Ed Brubaker and drawn with Ditko-esque daring by Javier Pulido - frames half a dozen past, present and future hints at what's coming from Marvel next year

They see: Terrax the Tamer, former Herald of Galactus, ignore Nova's warnings to evacuate the planet, resulting in him and the people he affects to protect being eaten by the Phoenix force. Jeph Loeb scripts in charmingly bombastic style, Ed McGuinness and Dexter Vines provide generally good-looking art, but choose to draw the Human Rocket as a ten-year-old. The colours of Morry Hollowell are outstanding.

A peaceful future in which mutants have displaced humanity is disrupted by a group calling themselves, stupidly, the X-Terminated, the last five humans alive. David Lapham provides the tough-talking script while Roberto De La Torre supplies the intense illustrations. The lovely colourwork here is to the credit of Lee Loughridge.

Kaine beginning his new life as the Scarlet Spider, fighting the instincts that tell him to kill. The short is brought to us by writer Chris Yost, who handles Kaine's internal narrative well, and artists Ryan Stegman and Michael Babinski do a fine job of making a Spider-Man knock-off in a hoodie rather sinister.

Dr Strange finding that realities colliding could mean the end of all in a pedestrian script by Matt Fraction, nicely drawn by Terry and Rachel Dodson - but Stephen Strange looks a right Wanxia in a bowler hat.

The Avengers in an apocalyptic battle against an army of Ultrons. Brian Michael Bendis is sparing with the dialogue but the script has a good blockbuster quality. Penciller Bryan Hitch benefits from the laser-sharp inks of Paul Neary, but their dramatic art suffers from some off-register printing.

And the bad boffins of the framing sequence reveal their ultimate plan - to facilitate the murder of The Watcher by someone known as The Unseen.

And unseen, by me at least, is what most of the continuations of these threads will be. The Ultron business looks like another Days of Future Past scenario, but instead of X-Men and Sentinels we have Avengers and Ultrons. Plus, it's being run in Avengers by Bendis, whose work I find usually begins well, before rambling into nothingness. And Kurt Busiek already gave us an ultimate Ultron War.

The X-Terminated are showing up in X-Force as the Age of Apocalypse gets another go-round ... I found the first time bad enough. Plus, it features some of the least-interesting X-Men villains - William Stryker, Donald Pierce, Graydon Creed, preachy types all.

After the excellent Spider-Island I've been intending to pick up Scarlet Spider, but even though he's not killing anyone here, Kaine is far too keen on slashing for my taste. I'll likely give it an issue or two, see if he gets a tad gentler.

The Defenders, too, I was already planning on picking up, but the Dr Strange taster dims my enthusiasm; I realise a first chapter can't have the hero enjoying the big win, but Stephen Strange is naive to the point of uselessness here. Perhaps the addition of Iron Fist, Silver Surfer, and, well, none of my actual favourite Defenders, will help. I'll try issue one, at least, in the hope that Nighthawk, Hellcat and the other fun Defenders show up.

Super-powered twins, hot and cold powers - it all feels over-familiar, but I love that Coldmoon and Dragonfire smile constantly, and wouldn't mind following them, for a while, at least. Shame this book doesn't mention where their story is continued - I suppose their meeting the Avengers points towards one of that team's 19 Bendis-written books, so that's that.

The framing sequence likewise ends without telling us where to go next - possibly one of Brubaker's Captain America titles, but who knows? 'Kill The Watcher' seems a little too cosmic for a Cap story.

Talking of over-Cosmic, the reason I liked Nova in his early years was that he was an unashamed Spider-Man rip-off: amazing powers + rubbish home life = a fine superhero soap. I'm not interested in him as a full-time space cop (somehow back from the Cancer-verse he was recently thrust into). Plus, his new costume is a terrible tweak of a classic, especially the helmet. Instead of a charming bucket, it looks like Nova is wearing a Starro on loan from DC Comics. And again, we're not told where the Phoenix story will be taken up before becoming some line-wide monster.

Marvel Point One fails in its aim of getting me excited about 2012's events. There's nothing in the way of fresh notions on display, it seems to be more a case of revisiting some of the former House of Ideas' greatest hits. I don't doubt some of the stories will be well done - there's undoubtedly a high level of craft on display here - but Marvel's current crop of creators have stood on the shoulders of giants so many times, the big guys are toppling over. Just one or two new concepts of the type Marvel's founding fathers would come up with, month after month, that's all I ask.

All in all, this is a useful comic from Marvel, a giant-sized special telling me what I won't be reading next year. I will be reading Daredevil, Avengers Academy, Secret Avengers, Spider-Man - books with steady creative teams who are, for the most part, left to go their own sweet way. Bloated events? No thanks.
Marvel Point One #1 review