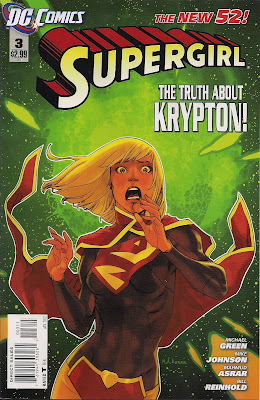 Kara Zor-El can't believe her newly super-ears. The man claiming to be her cousin is telling her that her homeworld, Krypton, is no more. Because he has no evidence to show her, because only three days ago she was babysitting the child this ... Superman ... claims to be, Kara turns tail. She flees China and returns to Siberia, where the pod that brought her to this strange new world came down.

There she finds no pod, but is joined by a hologram, avatar of an Earthling she can't understand. But we readers can, so are introduced to Simon Tycho, a 28-year-old trillionaire who pays national governments for the right to reclaim any extraterrestrial objects which land in their territory. He's taken Kara's pod to his satellite base above Earth, and lures her there for a series of trials.

An encounter with mechanical, heat beam-blasting butterflies reveals a new wrinkle to the regular super-power set, while a transparent brain being makes things a little sticky. Kara overcomes both, only to fall to a bad case of irony.

Writers Michael Green and Mike Johnson provide the best issue yet, striking a fine balance in their presentation of Kara. She's annoyed, yes, but understandably so. Unlike last issue, she doesn't lash out at Superman, she removes herself from his confusing presence. And she shows insight into people, realising that whoever this Superman is, 'there's something in his voice. Like he can only ever tell the truth'. And she recognises that the holo-smile of Tycho isn't the smile of a friend, it's that of a crocodile. She's using her brain, trying to work out what's going on and how to control her new abilities.

It's all very engaging.

Superman also does well out of this script, with Green and Johnson providing one of the best summations I can recall of what he's about (click on image to enlarge). 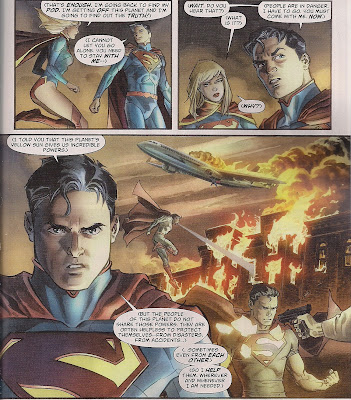 And how beautifully the cousins are rendered by regular artist Mahmud Asrar and visiting inker Bill Reinhold. Teamed with colourist Paul Mounts' sensitive tones, they produce stunning work, marrying dynamic layouts to delicate expressions - the feeling is as important as the force in this issue, and the three artists capture that. And look, they sneaked in Superman's banned kiss curl - ha!

The only thing I don't like about the art isn't their fault - how Supergirl and Superman look in their new costumes. When Mattel comes to make the next round of action figures there'll be no having to work out the points of articulation (let's just hope they have enough skin tone for Supergirl's Arse of Steel). 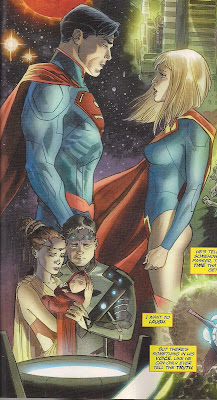 Rob Leigh, as he does in many comics each month, produces splendid lettering.

The cover, also by Asrar, is another winner, with Kara suitably stunned and the green of the exploding Krypton reflecting how sick she feels on hearing - and inwardly, believing - that her home and loved ones are gone. It's a terrific opening to a terrific issue.
Bill Reinhold DC New 52 Mahmud Asrar Michael Green Mike Johnson Paul Mounts Rob Leigh Supergirl #3 review Superman