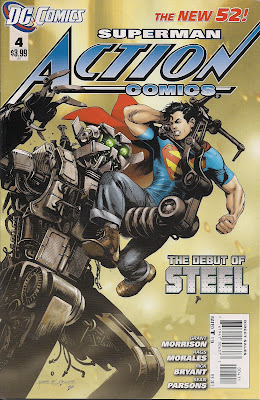 Brainiac's invasion of Metropolis continues, with his computer virus motivating the creation of thousands of 'Terminauts' across the globe. But they're not out to terminate humans, only Superman. The other part of their mission is to preserve - read, 'steal - Mankind's treasures.

Clark Kent, visiting an industrial plant with Lois Lane and Jimmy Olsen, splits off from his colleagues to go into action as Superman. He's soon facing not just the rampaging robots, but John Corben, 'Steel Soldier' turned host of the Brainiac colony. Help from an unexpected quarter gives Superman a chance to draw breath and see that an entire neighbourhood has been ripped out of Metropolis ...

And that's the main story in Action Comics #4, a rip-roaring tale of men, mechanics, monsters and miniaturisation from the ever-inventive, often-homaging Grant Morrison. As well as the bravery of Superman and his new ally, Lois shows her gutsy nature as she throws herself into the path of the unpredictable Corben, reminding him of his humanity in a bid to help Superman (click to enlarge).

Jimmy's pluck takes another form, as he films the chaos for the public record. Showing no courage at all is the fleeing Lex Luthor, who can't believe a  fellow mad scientist - even an alien one - would betray him. The story ends on a note of hope, with Superman informing an unusually conciliatory General Sam Lane that he has a plan, and annoyance, as readers are advised that the story continues in Action Comics #7.

Still, as next month promises a team-up of this Superman and his future self from the Superman title, alongside the Legion of Super-Heroes, I'll probably survive. I believe the two-part fill-in, drawn by Andy Kubert and Jesse Delperdang, is to help series penciller Rags Morales with his deadlines - DC are obviously keen that the collection of this storyline will be all Morales, but really, I'd rather see a monthly serial with rotating pencillers and a strong, stylish inker - a Karl Kesel, or Klaus Janson, say - brought in to iron out any niggly style differences.

I'm not anti-Morales - his art this issue is my favourite of his Superman work to date - but if I'm engaged by a story, I don't want diversions, even when they're adjuncts to the main storyline, as the upcoming fill-in looks to be. Let's have the classy fillers in between the big stories, not interrupting them.

Morales really does do a good job here, partnered by inkers Rick Bryant and Sean Parsons. His Superman is a dynamo of activity in defence of a Metropolis that isn't sold on having him around. His Lex is a weasel, Lois a fox and the Terminauts have a terrifying vibe. Then there's the unfortunate Corben and a half-glimpsed, fully scary new Brainiac. And all the players and movement are set against one of the best-realised cities you'll see in comics, with backgrounds just packed with buildings and activity.

Colourist Brad Anderson deserves a nod for smartly helping differentiate foreground and background action, and changing New 52 Jimmy's hair back from Bieber brown to classic ginger (a move that cheers me as much as the replacement of 'Sgt Steel' Perry White with the traditional version in last month's Superman). I also like that Superman's S-shield tee shirt this issue is white - he's obviously planning a merchandising line.

I've been coy about who helps Superman, purely to keep something back for when I got to the 8pp back-up strip. Which I have now. In it we see John Henry Irons, designer of the Steel Soldier outfit, don his own version and take on Corben. All the while, his internal narration tells us how he's inspired by the American folk legend of John Henry.

It's a tight little script from writer Sholly Fisch, and while the obscure legend doesn't resonate particularly with this Brit, neither does it overshadow the main event - John using smarts rather than fists to beat Corben. And there's a fabulous final line. Thanks to illustrator Brad Walker and colourist Jay David Ramos, the sequence comes to life on the page with real verve. 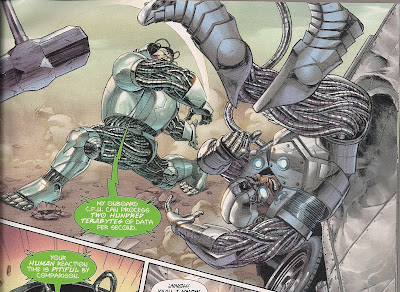 The Steel armour as introduced this issue, mind, is horrendous compared to the magisterial looks John Henry has sported in the past ... I'm praying it's a prototype. John Henry himself is younger and slimmer than in his pre-New 52 incarnation, which is a shame ... he had a good, strong look and now he's gone Hollywood. Still, I'm sure the Suicide Squad's Amanda Waller will be up for a date.

So, a more than decent little tale.

But no more please. If Action Comics isn't going to present 28pp Superman stories for our $3.99, I'm very happy to get 20pp stories for a dollar less. By all means spotlight the Superman Family in its own book, but seeing the same story from two perspectives in one issue? No thanks.
Action Comics #4 review Brad Anderson Brad Walker DC New 52 Grant Morrison Jay David Ramos Rags Morales Rick Bryant Sean Parsons Sholly Fisch Steel Superman