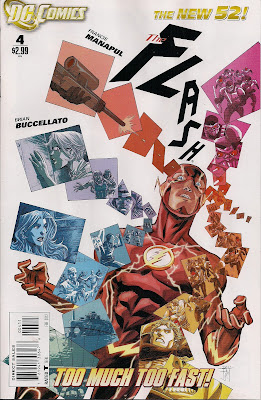 How's that for an eye-catching cover. It's Flash using his newly discovered ability to see all possibilities in a  situation. Sadly, last issue this led to a bout of over-thinking which was the death of him. Apparently.

Unsurprisingly, Barry survived, his super-speed instincts kicking in and stopping a bullet to the skull from proving fatal. We don't learn this straightaway, though - writers Brian Buccellato and Francis Manapul keep us on tenterhooks for 16 pages before we rejoin a just-waking Barry. Much of this space is taken up in revealing how Barry's CIA agent friend Manuel spawned the multiple man menace known as Mob Rule. It's basically a more detailed/icky version of what we already know - spy gets regenerative abilities, extra bodies ensue - but the detail helps bring Manuel to life, and ties in with the issue's theme of roots. What we don't get is an explanation for the horrible name Mob Rule ... nobody would call themselves that.

Members of Mob Rule are explaining their background for a good reason; they want another of the Flash's friends, Dr Elias, to help stabilise their metabolisms, stop them dropping dead after only a few months. Being a good guy, and obviously relishing a challenge, he agrees to help, but it'll take tapping into an experimental power source.

That's because a massive electromagnetic pulse soundly buggered up the power grids of sister cities Central and Keystone, leaving the police trying to maintain order on horseback. One cop, Barry's lab partner and girlfriend Patty Spivot, gives Manuel Number One a piece of her mind over his leaving Barry to face the music last time, reminding the selfish spy what it means to be a friend.

Bubbling under we have the Iris West subplot, which sees her trapped in Iron Heights prison mid-riot, and about to break free via some leftover ice from the missing Captain Cold.

When we finally join Barry we get the best part of the story, as he states what being a hero means to him. Unlike Manuel, we can be assured Barry won't ever prevaricate over doing the right thing - heroism runs through him like 'Blackpool' through candy rock. Ironically, though, his desire to do right may have been stoked by Manuel's words years before, when the tyro CIA agent told him: 'You gotta do something meaningful in your life and take a stand.'

The final two pages really are something, a succinct, flashy statement of who Barry Allen is today - a good man, a man of action. It's another fine sequence from Manapul and Buccellato who, as well as writing, draw and colour the book respectively. Their creative synergy gets better by the issue, with script and art gelling beautifully. Well-rendered flashbacks and sail-powered cars are just two of the visual treats on offer this time. The only tweak I'd like to see with the art is some ageing-up of the characters - a lack of facial lines make it seem we're in a world of 20-year-old Botox addicts.

There's a nice link to another DC series here, one which doesn't require us to buy that comic, it simply adds texture to the New 52 world, knitting it together. So far as this book is concerned, little script mysteries such as what caused the EMP, what Captain Cold's up to and the small matter of Dr Elias' mystery power source, add intrigue and value.

Four issues in, and there's no sign of The Flash slowing down. It's one of the hits of the DC New 52 and rightly so.