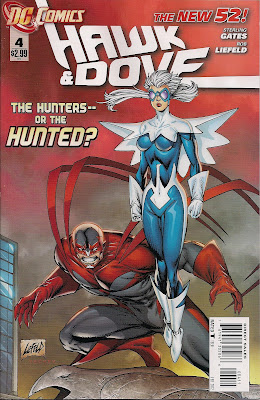 We join Hawk and Dove soon after the events of last issue, as they interrogate the murderous Condor about their mutual connection. Along the way we're filled in as to how the fight between the heroes, Condor and his ally Swan at the White House panned out, and learn that Deadman has a bigger part to play in this storyline than 'annoying ghost boyfriend'.

There are also mysteries - Condor claims to be 200 years old while Dawn insists she wasn't always a peaceable type - and the usual action in the best issue of this series to date. The usual action there may be, but there's less of it, allowing for the intrigue and plot movement mentioned above. And calmer things to draw seem to have slowed penciller Rob Liefeld down, bringing his best work yet. There's no let-up in the dynamism of the fight scenes, but Liefeld also finds the drama in the quieter moments, using intelligent layouts and expressive bodies to bring the best out of Sterling Gates' nicely measured script. Hawk still has the manic intensity, the killer grin, but the look is restrained, less warped.

The inks from Adelso Corona and Liefeld himself are similarly noteworthy, with pleasing effects, such as background figure blurring. This may be a Photoshop trick, and if so, fine - a tool is a tool, the clever bit is knowing when to use it. An impressively hands-on finish sees a close-up of the elderly Condor come off like classic Joe Kubert, partly thanks to the fine colouring of Matt Yackey (click on image to enlarge). The final element of the pages, Dezi Sienty's letters, are equally sympathetic - this is a creative team that's gelling extremely well.

If you've been dubious about this DC New 52 book, give this issue a try - it's slambang action with a side order of suspense.
Adelso Corona DC New 52 Dezi Sienty Hawk and Dove #4 review Matt Yackey Rob Liefeld Sterling Gates