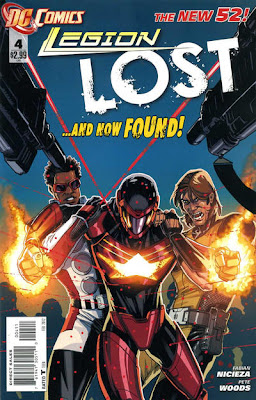 The forward momentum nevers stops in this series, which follows a group of Legionnaires trapped in the 21st century out to stop a virus that's turning humans into alien hybrids. This month sees Timber Wolf, Tyroc and Wildfire tackle the creature Chameleon Girl has become, as Tellus and Dawnstar search for Alastor, the terrorist who released the virus. Along the way we see how well Tyroc and Wildfire fight as a unit, as they escape a bunch of ungrateful policemen, and watch Timber Wolf become increasingly amused by the ridiculous odds they're facing. Tellus uses his telepathy to help super-tracker Dawnstar sift through all the information she's absorbing until a eureka moment finally allows her to pinpoint their prey.


And because Tellus is linked to the other Legionnaires, Dawnstar is perfectly placed to take the series' narrative baton. As she comments on her teammates and the action, we see that she admires their capacity for optimism, their 'See. Do. Simple' attitude. Eventually she throws her natural caution to the wind, presaging a typically explosive conclusion.

Typical, but not boring. Writer Fabian Nicieza provides another perfect cliffhanger, topping off a chapter choc-full of well-plotted superheroics. The overarching virus plotline moves forward as we learn the current state of Alastor and new players enter the game, while the characterisations are polished nicely as the action plays out. And I learned a new word on looking up the issue's title, Coseismic, so feel smarter. Nicieza is on his A-game and it's a shame personal circumstances have him leaving the series with #6.

Artistic partner Pete Woods continues to make this Legion sub-team his own while having fun with the alien/human hybrids. Favourite moments this issue include Dawnstar showing off her in-flight yoga and Tyroc and Wildfire's takedown of the misguided cops. The range of facial expressions is impressive, and the power depictions suitably flashy - I'm finally noticing Tyroc's wonderfully loopy flight trail. Plus, there's eye-catching colour work from Brad Anderson, and energetic lettering from Carlos M Mangual.

If you've not tried this series yet and were put off by early reviews (ahem), go back, find the issues - physically or digitally - and dive in. I doubt you'll regret it.

///////////////////////////////////
Building work is preventing me from accessing my scanner so the cover image this time is borrowed from the Grand Comics Database, one of the best comic websites around. Thanks chaps. hope that's OK.
Carlos Mangual DC New 52 Fabian Nicieza Legion Lost #4 review Legion of Super-Heroes Pete Woods