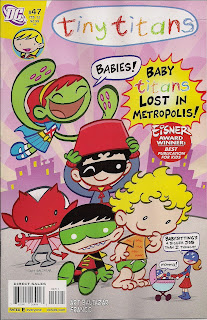 It's adventures in babysitting for Bumblebee, Miss Martian and Mrs Atom as they take the Justice League's little ones into Metropolis for ice cream. The hope is that Bumblebee will earn her Team Nucleus babysitting patch by showing she's a responsible young heroine.

Team Nucleus? That would be the shrinking heroes of the DC Universe, comprising Atom Ray, Atom Ryan, Molecule, Ant and, as a treat for fans of the Eighties Suicide Squad, Atom Adam Cray. Shockingly, Mrs Atom doesn't seem to be a member, but that does make her available to help Bumblebee out.

The babies are Arthur Jr, son of Aquaman; Damien and Jason Toddler, Batman's bairns; Kid Devil, claimed by Trigon as his own; and Miss Martian - not actually a baby, but she's around and J'onn J'onzz offers her assistance.

There follow hi-jinks as the babies go missing, including a wonderful sequence of Aquababy commanding sea creatures, and the Bat-brats encountering a tiger. Plus, there's what looks like a cameo by Jimmy Olsen, maybe that's creators Art Baltazar and Franco getting set for their upcoming Superman Family series.

And, in the realm of 'panels worth the price of admission', there's Jason Todd, with his prototype red hood/bucket, enjoying an ice lolly:

Just three more issues and the delightfully amusing Tiny Titans is no more. Never mind an ice cream, relish this comic while you can.
Art Baltazar Franco Tiny Titans #47 review