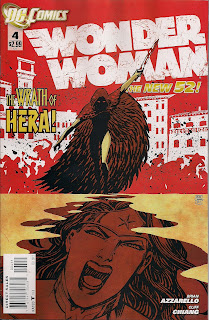 Having learnt that she's the product of a dangerous liaison between mother Hippolyte and king of the gods Zeus, Diana has flounced off Paradise Island for her home in London. This leaves her mother that little bit more vulnerable when a very peeved Mrs Zeus, Hera, comes a-calling ...
Diana's not alone in the English capital, as she hangs out in a music bar, drinking her troubles away; nearby are godly messenger Hermes, and Zola, the backwoods gal she's protecting should a vengeful Hera come calling - Zola is the latest mortal to be carrying a child of Zeus. Less-welcome company is newly revealed half-sister Strife, not just Zeus's spawn, but Hera's daughter too. And always ready to live up to her name and spread discord. Threatening Zola's baby bump shocks Diana out of her funk - why the heck was she putting up with Strife, responsible for the deaths of many of her Amazon sisters? - and leaves Strife bloodied and bloody-minded.

Over on Paradise Island, Hera does indeed appear, resplendent in cape of peacock feathers. Knowing she has no chance against a goddess, the warrior queen bows down and asks for forgiveness. And Hera seems set to look with compassion on the weaker woman, so vulnerable to her husband's charms.

In London, back at Diana's flat, a chat with Zola prompts her to reconsider her reaction to Strife's revelation that she was born not of clay, but of woman. She borrows Hermes's Caduceus, the wand which can transport her across the world, and seeks out her mother. Diana finds Hippolyte, but she's in no fit state to accept an apology thanks to the departed Hera. She's been petrified, and her Amazon sisters are in equally dire straits, having been transformed into snakes.

Away from this issue's main action, in war-torn Darfur, the sun god Apollo finds his brother Ares, the war deity, and implores him not to stand in his way as he bids to fill the power vacuum caused by the disappearance of their father, Zeus.

While my preferred Wonder Woman is a straightforward superhero, that's not writer Brian Azzarello's vision for Diana. His stated aim is to make this a horror book, and on that basis, it's difficult to fault his script; there's a palpable sense of menace to this world he's created, with precious little sign of light at the end of the tunnel. Diana, Hippolyte and co know they're minor players in the gods' grand drama, pawns who can be easily crushed. But with the knowledge that she's a demi-god, Diana looks set to find a greater will to kick against the capricious Olympians.

This issue is about facing up to facts - Hera cares not that the adulterous Hippolyte never intended to hurt her, while Diana admits she felt defined by the belief that she came from clay. Coming to terms with reality is proving painful for mother and daughter - literally.

The conversation between Diana and Zola is my favourite scene, as they talk about what home means to them. This is followed by my top visual moment, the broken-footed Hermes sprawled out on a comfy chair in Diana's flat, a pale, sharp-faced god, wildly incongruous in modern clothing, TV zapper in hand. And that's despite my not liking how chubby the new Wonder-corset, as drawn by Cliff Chiang, makes Diana appear in that very same panel.

Chiang's standout character is Strife, dark-eyed and darker of heart, and perfectly coloured by Matthew Wilson; she looks every bit as insidious as Azzarello's dialogue makes her sound. Hera is less successful. I guess there's meant to be a sexiness to the fact that she's naked under that peacock cloak, but ... not so much. She looks like a drunk old broad who's forgotten how to dress, and the lighting tricks necessitated so as not to scare the horses bring some awkwardly contrived shadow play.

Still, I'm a Chiang fan and very pleased he's applying his talents to this book - he's a splendid storyteller and full of interesting design ideas, most of which work. And his collaboration with Azzarello makes for some sharp comic booking - not necessarily the Wonder Woman I want, but a Wonder Woman I can enjoy for awhile.
Brian Azzarello Cliff Chiang DC New 52 Matthew Wilson Wonder Woman #4 review