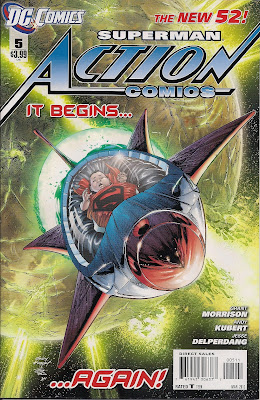 Krypton is dying and Jor-El sees just one way to save his family - sanctuary in the ethereal prison that is the Phantom Zone. Unfortunately, the criminals already there put paid to that idea, ending the hopes of survival for he and wife Lara. But their son can perhaps be saved, if a tiny, experimental interstellar craft can take Kal-El to a world where he can flourish.

The rocketship lands on Earth, at the feet of Martha and Jonathan Kent. Spotting the helpless babe inside, the childless couple see their chance to become a family. Knowing the authorities brought by the craft's earthfall will expect to find a tiny passenger, Jonathan fools them with some gruesome sleight of hand, allowing Martha to hide the child.

Years later, mysterious figures - the Anti-Superman Army - steal the rocket's Kryptonite engine, a deadly tool in their fight against Superman. But the Man of Steel has friends at his side - the adult Legion of Super-Heroes.

And so goes 'Rocket song', the latest retelling of Superman's origins. As ever, there's a mix of classic and new detail, while the conclusion leads into next issue's Legion team-up before we return to the main storyline - Brainiac's abduction of Metropolis. Brainiac's in here too, as the artificial intelligence running the rocketship, and narrating the sequence. If I'm reading things correctly, this early Brainiac takes root on Earth, preparing to make it a Krypton-style planet, decades before its brother Brainiac deploys shrinking technology on Superman's hometown.

Grant Morrison's dialogue in the Krypton sequence is awfully stagey ('There are threatening figures emerging through the colourless fog') but this has to be deliberate melodrama, connecting this retelling to the Superman strip's origins in early SF stylings. By the close of the story the words are more naturalistic, well, as naturalistic as comics starring Superman and the Legion can get ('We're up against something that can erect impregnable shields around events').

That last bit of business, along with terms such as 'superspace' and 'untime', shows that Morrison is going into All-Star Superman mode, bringing on the big shiny ideas that helped make that book such a standout. The extrapolation of said ideas should make perfect fodder for the Legion's guest appearance next month.

Details I like include Lara being involved with the rocket design - in previous histories she had been a trainee astronaut - though I could live without the awful term 'mothermatician'; Jor-El specifically telling the computer to find a planet that would let his son 'seem to fly', presumably to allow him to escape any future planetary extinctions; the mention of Kal-El hearing Krypton explode, a memory that will haunt him; Jonathan and Martha's resourcefulness at the start of their relationship with Kal mirroring Jor-El and Lara's at the end of theirs. And I'm not sure how Morrison did it, but this telling of the origin made the latter seem closer to us, not so much aliens sending their child into space in a rocket as parents tossing their baby out of a burning building and hoping that, somehow, he'll be okay.

The artwork of penciller Andy Kubert and inker Jesse Delperdang, with blazing colours by Brad Anderson and letters by the stalwart Patrick Brosseau, is outstanding. They give great Jor-El and Lara (the beardy superdad of recent years is, happily, gone), and draw an eye-catching end of days for Krypton, with slanted panels adding to the sense of unease. The spread of the rocket bursting into space as Krypton expires makes the oft-seen scene seem fresh. Their adult Legion costumes are majestic.

And they give Lara this hat. 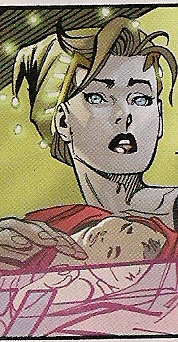 How many of us could look that cute at the end of the world?

Superman's other mother, Martha Kent, doesn't get a cute hat, but she does sport an elegant veil in the issue's back-up, 'Baby steps'. Writer Sholly Fisch and artist ChrisCross show us Jonathan and Martha Kent's life from their wedding day through to the arrival of that rocket. Actually, not all aspects of their life, just their attempts to have a child; like many young couples, they assume children will just show up.

Sadly, this isn't to be for the Kents and we see how they supported one another through the disappointments. Despite their plight, the tale ends on a note of optimism that bodes well for Kal-El's future - there's no doubt he's destined for a house of love. 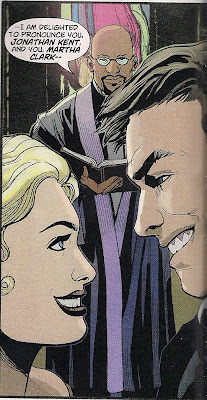 And on a shallow note, ChrisCross, as well as conducting their wedding ceremony, draws the hottest Ma and Pa Kent ever ... it's weird to think of the Kents as sexy but heck, they are newlyweds here.

The story also has highly commendable colouring from Jose Villarrubia (check out the texturing on the church) and fine lettering from Carlos M Mangual.

A fill-in this issue may be, but it works as both a standalone detailing of Superman's beginnings in the DC New 52 universe, and a pleasing side sequence in the main story. And that's far more than I expected.
Action Comics #5 review Andy Kubert Brad Anderson Carlos M Mangual ChrisCross DC New 52 Grant Morrison Jesse Delperdang Jose Villarrubia Patrick Brosseau Sholly Fisch