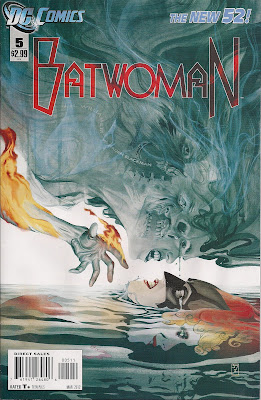 Now if that isn't the spookiest cover you'll see this week, courtesy of JH Williams III ...

A spot of meditation helps Batwoman - 'proud lesbian' Kate Kane, as the page one legend so subtly puts it - realise how to stop the water spirit who's been stealing Gotham children. She confronts the ghost, Maria, at the scene of her death, and puts her plan into action, sending the spook into the afterlife ... but not before Maria gives Kate a chance to come to terms with some ghosts of her own. Finally, the dissipating demon provides a clue as to where she's stashed the kids: 'They are in Medusa's coils. But you can still save them ...'

Medusa? Is there a gorgon in the house? No, but Mr Bones and Agent Cameron Chase of the Department of Extranormal Operations are at chez Kane, to make Kate an offer. That's offer spelt B.L.A.C.K.M.A.I.L. - she joins the government organisation and takes down the global criminal cartel Medusa (aha!) or her father goes to prison for helping Batwoman's operations.

Later, Kate sits at the bedside of critically injured cousin Bette, the heroine formerly known as Flamebird whom Bones tricked into revealing Batwoman's real name. Batman appears, and of course, he knows that Kate is set to take up Bones' 'offer'.

And that's pretty much that. The ghost is gone, and it seems she really was a ghost - I thought such things weren't allowed in the Bat-titles. We see that while old bossyboots Kate made more experienced heroine Bette re-train under her, clad in an ugly boiler suit ('I burn your colourful garb - I am the Proud Lesbian in this family') and going by Plebe, she's the one everyone is getting the drop on ...

Seriously, one minute the DEO bods are making themselves at home in her apartment, the next Batman surprises Kate and it's obvious he's bugged her place. Batwoman is great in the field, but seems a rank amateur when it comes to other aspects of the hero game. Methinks she needs to spend less time dabbing herself with freakily white clown foundation and more improving her security.

Still, the story by Williams and W Haden Blackman holds the attention, while Williams' art is a wonder to behold. The problems I've sometimes had with his showy layouts are absent this issue, and there are several standout scenes, such as the confrontation between Kate and Maria the Unfriendly Ghost. The colours of Dave Stewart and letters of Todd Klein complete the spooky effect. Then there's the full-page illo of Bones and Chase making their presence known; it's three figures, no action, yet utterly magnetic. Kudos to DC for gathering the intricate story pages together and moving the zillion house ads (bring back the lettercols!) to the rear of the book.

I believe this storyline has one issue to go, and it's been quite the ride. Admittedly, Kate gets on my nerves occasionally with her inability to reach out, her haughty attitude, but my gosh, she stars in one compelling comic book.
Batwoman #5 review Cameron Chase D.E.O. Dave Stewart JH Williams III Mr Bones Todd Klein W Haden Blackman