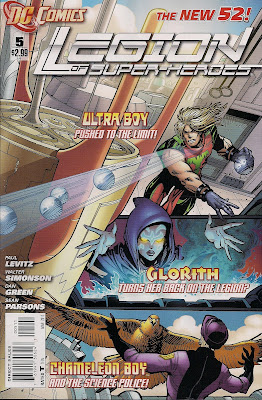 'One day, a thousand years from now ...' the Legion of Super-Heroes takes a breather. With no universe-shaking crisis to beat, the members enjoy a rare day of downtime. They train, they love, they party, they work. Over the course of 24 hours we check in with, by my count, 29 members and reserve members, the most we've seen in any issue of the Legion since its recent relaunch.

If you're looking for big dramas, this isn't the issue for you. But if you're wanting perfect cameo portraits of the members who make up the galaxy's greatest super-team, don't miss it. There's Cosmic Boy obsessing over the missing, presumed dead, team currently to be seen in Legion Lost; Harmonia Li putting the lie to her name with a disastrous spot of music making; teenage witch Glorith disturbed by ... something; Polar Boy drunkenly carousing; Dream Girl seeing 'a weird image of some big old stones ...' and more.

And it's not just the current team make-up, as we check in with the likes of child-raising founders Saturn Girl and Lightning Lad; odd couple Blok and Black Witch (in tabloid-speak, the Blok Witch); and Academy graduates Power Boy and Gravity Kid, who I'm happy to see are considered part of the gang.

The Dominator incursion plotline bubbles along, while there's foreshadowing around the nature of Glorith and those stones. The latter show up for real on the final page, which melds hope and foreboding in a single image. Overall, this done-in-one story is a box of chocolates without a solitary hard caramel, and congratulations to writer Paul Levitz for pulling it off (click on image to enlarge) 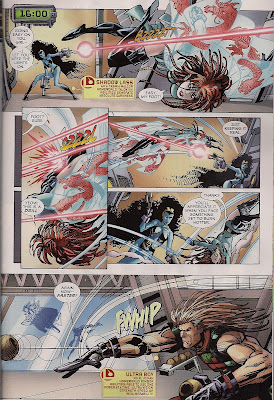 Joining Levitz is another Legion veteran, though one whose service record is a tad spottier. Still, I'll forgive this deserter as it's the great Walt Simonson, who drew the odd Legion story back in the Seventies. His loose line is perfect for this lighter tale of the Legion, his knack for body language brings the members to life and his kineticism proves handy when it comes to depicting such things as Ultra Boy playing ball. My favourite scene shows Vi on a tiny running machine by the bed she shares with Lightning Lass - it's just so ordinary yet, as she grows to full size, extraordinary.

I love Day in the Life stories, because they show what the heroes are protecting - the status quo, the joyful Ordinary, that's worth fighting for. And this is a splendid one.
Dan Green DC New 52 Javier Mena Legion of Super-heroes #5 review Pat Brosseau Paul Levitz Sean Parsons Walt Simonson