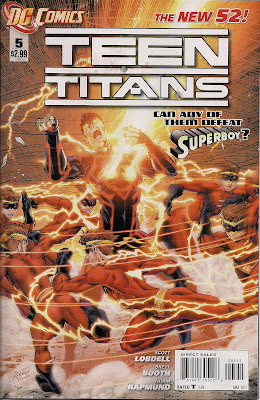 Superboy has pretty much beaten Wonder Girl but before he can turn her over to his masters at NOWHERE, her new friends - christened the Teen Titans by Red Robin - arrive on the scene. After a bunch of individual tussles, they lie defeated but score something of a win ... Superboy tells the shady organisation he wants answers and won't be their lapdog anymore.

I've been enjoying the latest take on DC's long-running teenage team, but this issue lets the side down badly. It's a dumb comic. Having announced on page two that his secret weapon is tactile telekinesis, the Titans don't use that knowledge against him. They're not a team yet, but they at least have numbers and could round on Superboy as a unit, destroying his concentration. But no, they attack one on one. Kid Flash runs off half-cocked and winds up tossed right across New York (and not even by Superboy). Bunker's super-Lego proves spectacularly ineffective. Solstice bolts to save Kid Flash before he crashes into a boat in New York Harbour ... by blasting said boat in two and putting civilian lives at risk.

Red Robin finally tries the 'break his concentration' idea, but not having any actual super-powers to back up his assault, proves easy meat for the super-powered clone. And when Wonder Girl jumps back into the fray, she's apparently squished by a subway train.

I say 'apparently' because while we see the train coming, the impact panel is taken up by a nifty, but unhelpful, sound effect. It's safe to assume, though, that there will have been more injuries to innocents.

All of which goes to show that these kids shouldn't be allowed out; they're just not bright enough to cohere as a team, or to prioritise the safety of civilians. I'm not saying give 'em to NOWHERE - Solstice talks of 'everything NOWHERE has done to me, and made me do on their behalf', so they're hardly an after-school club - but these Teen Titans are in need of heavy mentoring.

To be fair, at the beginning, Red Robin does suggest they need a plan, but the guy is so patronising ('Follow my lead, guys - it's our only chance') that you can see why individuals might run off half-cocked.

I really hope this NOWHERE plotline wraps soon, as it's taken up ten issues of Teen Titans and Superboy and is getting wearisome. Plus, his dealings with them have made Superboy so scarily unlikable that I can't see how the Teen Titans could ever sign him up.

I can see that this battle was inevitable as part of the Titans' journey - not necessary, but inevitable in a genre where stories progress through dynamic physical conflict - but it doesn't make for a gripping issue. The feel is very much 'going through the motions' as we wait for Superboy's inevitable u-turn. In fact, the most interesting thing about it is trying to work out who that is on the Missing poster - it looks like the original, John Byrne-created Wonder Girl, but it's not going to be her. Any guesses? 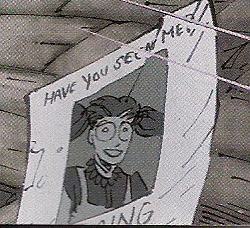 The art by Brett Booth and Norm Rapmund is suitably big and bold, with good facial expressions (check out Kid Flash's tongue hanging out as he concentrates, or Wonder Girl's fear as she's dragged below the streets). There's an almost tangible sense of danger sizzling off the page, not something you can say about many comics. The costumes remain awful - outside of Solstice's starkly black look - but hopefully they'll get replaced in time.

The colours by Andrew Dalhouse complement the art well, while Dezi Sienty's lettering is just the job (bar Wonder Girl describing her magic lasso as 'a grift from the gods' - then again ...).