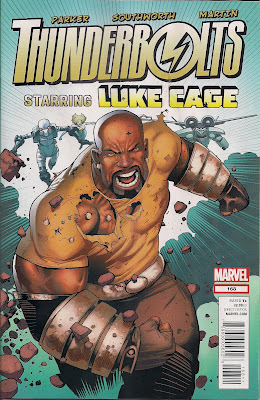 Luke Cage doesn't just take the cover, he takes the spotlight this issue, complete with Bronze Age splash page legend ('Carl Lucas was a felon going nowhere ...'). The Thunderbolts director is busy rounding up pesky escapees from supervillain prison The Raft. Colleagues Songbird and Mach V, meanwhile, are confronted by the even more annoying apparatchiks of FACT - the Federal Advisory Committee to Thunderbolts.

The issue kicks off with its best scene, as Luke tracks down deeply dodgy Spider-Man villains The Enforcers to a Wild West bar. His action-packed encounter with the Silver Age losers is sheer delight.

The main part of the book sees Luke face the things that give him sleepless nights, courtesy of Mr Fear's fear gas - and it's not just the obvious, such as harm coming to wife Jessica or baby Dani. There's the fate of the time-lost Thunderbolts, for one. The possibility all his teammates will die under his watch. Worst of all is the notion that he killed former Thunderbolt Joystick ... I think. This is where the story loses me. There's a woman in the hallucination referred to as Janice, and the only Janice I can recall in this series was the frankly rubbish Joystick. I don't recall her having any particular history with Luke, and so far as I know she's alive. So it may be another Janice.

A-ha, a slow pacing back and forth through the comic tells me Janice is likely the crony of Mr Fear whom Luke faces pre-hallucination (she seems to be called Soundwave, but introductions are absent and the only Marvel character of that name I can find reference to online is a Transformers character). Luke chokes her in the dream. When he returns to wakefulness, he sees that if she is dead, it wasn't his doing. Hurrah.

Luke's fear dream is further complicated by the apparent presence of Thunderbolts member Ghost, the cyber terrorist he had dive into a time portal a few issues back (it's complicated). He says he's been changed by the experience, is no longer a physical being ... but is this part of the illusion too?

Then there are the intercuts with the FACT conversation, which occasionally feed into Luke's vision - he 'murders' Janice to a commentary from Songbird about Thunderbolts being considered 'lowlifes' willing to kill. Apparently, at some level Luke fears he's still Carl Lucas, street criminal with more bad than good in him.

Songbird and Mach V tell the politicians just what they think of the way Washington is running the Thunderbolts programme. Interrupting the chat is a British insurance broker who brings a mysterious message ... just as Luke breaks out of his nightmare to find Mr Fear gone.

The old bit with a hero facing his fears usually involves long-held insecurities, so it's no wonder the mid-dream 'death' of an unrecognisable lackey confuses. Thunderbolts under writer Jeff Parker has long been one of Marvel's most reliable, entertaining reads so this confusing instalment is very much an aberration. My big fear is that the more often Thunderbolts double ships - as it does this month - the more we'll get less than stellar issues (last month's was no great shakes, either).

Ah well, at least the book looks superb, with Matthew Southworth providing some great strip work. Songbird, Mach V and Luke have never seemed more human, while the (possibly) new-look Ghost does indeed have the tinge of the grave about him. And Frank Martin Jr's colours distinguish brilliantly between the issue's two main environments.

The cover by Kev Walker and Chris Sotomayor is good old-fashioned fun, but the splash features one of those Eric Canete illos that make poor old Luke look like a lunatic, melting walrus.

While I can't recommend this issue to first-timers, I would say try pretty much any issue since Jeff Parker's run began with #138. With sharp plotting, surprising character work and strong art from regulars Kev Walker and Declan Shalvey, it's one of Marvel's best books. Usually.