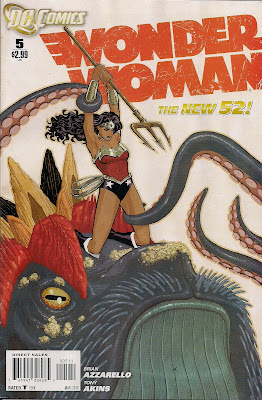 Diana's having a breakfast of tomatoes in London with pals Zola and Hermes when a stranger, Lennox, brings a side order of obtuseness.

'It must be something to learn yea has a dad the same day yea learn he's scarpered off the ... call it the immortal coil?'

Well cor bloimey and lor luvvaduck. Rather than tell the fella to get back to Mary Poppins, Diana lets him speak, and believes his story that with Zeus being dead, some of his children are jostling for position. She also takes on board his claim that he's a member of her newfound family too, one who discovered his links to Olympus on the battlefields of the Second World War.

So she takes Lennox at his word that she has to be on Tower Bridge at 'six bells' or live to regret it. Who should turn up at 6pm but Poseidon, god of the seas, not in familiar old guy pose, but as the biggest, ugliest fish you ever did see? Diana changes into her Wonder Woman outfit to have a chat. Poseidon says he's going to be the new lord of Olympus, Diana stirs the pot by lying, telling him that Hera has her eye on the prize. 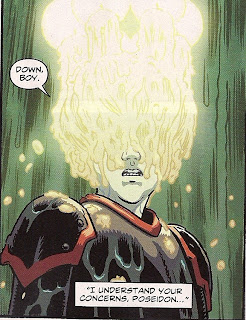 Back on the rain-sodden streets of London, a pair of (masked!) centaurs appear behind the crowd watching Diana. And on some godly plain, Hera seethes at Diana's weasel words.

So Wonder Woman's plan to take on Hera, who has killed her mother and threatens Zola and her child, is based on a lie? I'm taking it that she aims to get Poseidon and Hera at one another's throats and hope they take one another down. I get that Hera's power levels are far beyond her own, but truth has always been one of the most powerful weapons in Diana's arsenal. I'm all for using it, not abusing it.

I'm baffled as to why there's such a long gap between Lennox's arrival at breakfast and Poseidon's at teatime - we're told Diana and Zola have spent the day together, which isn't very proactive for a superheroine; she should be rounding up troops against Hera, not sticking by Zola's side for Hera's inevitable attack ... act, don't react. Take the offensive. Even Hermes sees that sticking close to Zola just makes her a bigger target.

Mind, this Diana isn't the sharpest tool in the Amazon armoury, suggesting that Zola having Zeus's child somehow makes Zola her aunt. Why does Lennox gain Diana's trust so easily? Who's told him to go into the sewers? Why doesn't Diana ask more questions?

Five issues in, and as atmospheric as this story is, as nicely written as the dialogue is when Brian Azzarello isn't reaching for local colour, I'm impatient for the wrap-up. Wonder Woman seems far from the star of this book, which is basically Clash of the Titans meets Dynasty. It's a seemingly endless parade of gods and godlings knocking on Diana's door, telling her things. There's no spark to Diana, no optimism, no sense of her taking control. She should be unifying the Amazons to storm the gates of Olympus, not cowering in London waiting for the next thing to happen.

Cliff Chiang is absent this issue, but fill-in penciller Tony Akins produces more than decent work, keeping the Chiang feel. Diana, Hermes and Zola are all on-model, he can draw realistic street clothes, his London is convincing - he gets across the idea of rain swimmingly - and his creatures of myth are suitably unearthly. Not that all the monsters work - Poseidon looks just ridiculous, like a fat refugee from The Little Mermaid with his daft 'crown' of shells. There's no sense of grandeur, or threat - he looks plain silly.

In all, this is another good issue of Azzarello and Chiang's Wonder Woman, but if someone told me they were leaving tomorrow, I'd be fine with that. The title character in this run isn't DC's most famous heroine, she's a bit player in a tale of gods and monsters, Percy Jackson in a swimsuit.
Brian Azzarello Cliff Chiang DC New 52 Tony Akins Wonder Woman #5 review