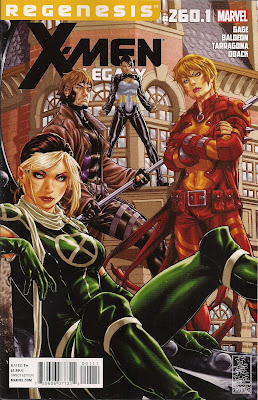 'We didn't get to be kids. But we're gonna make damn sure they do.'

That's Rogue, sharing her mission statement now she's resident at the Jean Grey School for Higher Learning.  Listed as 'senior staff member', she may not have a specific role, but if this issue is anything to go by she's set to be the heart and soul of the school. She begins by turning an American Football game into a training exercise, teaching young mutant Rockslide more about his powers in two minutes than he's learned in years. Then she leads all available older mutants against an old enemy of the X-Men, while ensuring the students are oblivious to the situation. All the time she's keeping morale high, encouraging her friends to be the best they can be.

Said menace is the N'Garai, interdimensional demons who feast on the blood of innocents. One drop from a student and they win. But while their power and numbers are immense, they're not too bright, whereas years as a mutant terrorist - and more years as a superhero - have made Rogue a tactician par excellence. Plus, her mimicry abilities have taught her how to mix and match abilities for optimum effectiveness.

This comic isn't as light-hearted as sister title Wolverine and the X-Men, but it's a hoot watching Rogue keeping the school running smoothly while all hell breaks loose outside. And it's superb to see the characters set to be regulars - Iceman, Husk, Cannonball, Gambit, Frenzy and Rachel Grey - cut loose in angst-free battle scenes. They're not fighting for the future of the so-called mutant race, they're acting for the actual human race of which mutants are just part. And they're good.

His Avengers Academy experience equips new writer Christos Gage perfectly for the dynamics of the Jean Grey school - he can do young characters, he can do older characters, he can blend action and soap seamlessly. Off-the-battlefield highlights this issue include siblings Cannonball and Husk disagreeing over how to commemorate fallen students, old rivals Gambit and Frenzy finding common ground and Rockslide's hard-earned nous showing through. Clever use is made of classroom lessons and the natural friendship between Rogue and Rachel is a joy to see.

And then there's the dialogue, which offers such gems as: 'Your power ain't an anti-depressant' and 'But magic isn't an exact science'. I'm confident Gage will do great things in his X-Universe stint. 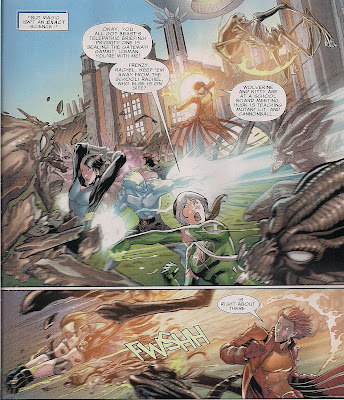 And if penciller David Baldeon and inker Jordi Tarragona stick around too, all the better (click on image to enlarge). I love their page designs, straightforward without being dull, with the action and emotion crystal clear. The quiet moments are as well-thought-out and effective as the big scenes. I could do without the PhotoShop effects, mind, and they can't draw Gambit's ears for toffee, but who cares about the X-Men's answer to Pepe Le Pew?

Kudos, too, to colourist Sonia Oback and letterer Cory Petit, for good work throughout, and Mark Brooks for a spiffy cover.

Looking at the membership, the only regular I'd send to detention would be Frenzy ... a bad girl in an X-comic is about as predictable as a hairy teen, plus, her power set (super-strong, durable) is dull, her haircut is nasty and I keep thinking I'm looking at rubbish Team Titan Mirage.

Knowing Gage, mind, she'll likely be my favourite within a month.