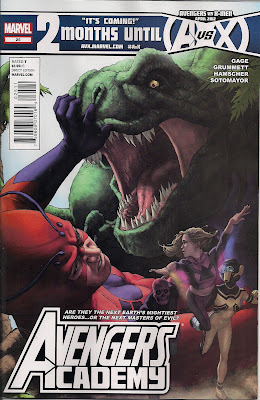 Science meets sorcery in Hybrid and the old Rom villain is hungry - hungry for the students of Avengers Academy, a tasty power source for an energy-eating beast. Recent issues have seen him take control of some students, as well as staff members, with the help of Reptil. But not Reptil as we know him - the dino-teen has had his mind taken over by his future self, who believes that facilitating the deaths of his old classmates is the only way to save his timeline. (What the problem is, we're not told - I suspect a goatee plague.)

As we join the Academy this issue, Reptil has had enough. He's realised that this isn't the way, that no one deserves to be sacrificed on the altar of his future. So it is that while Giant Man leads the fight against the horde of Hybrid, Reptil enlists aid from very surprising quarters.

And once the newcomers have helped see off Hybrid and his mind-controlling ways. they deliver a brand new headache.

As ever, writer Christos Gage shows that personality and action don't have to be mutually exclusive in an Avengers book. His characters reveal aspects of their natures, they change and develop, but they do it while saving the world rather than, say, speaking into a dictaphone. And little by little, we're seeing teamwork emerge naturally. My favourite moments this issue see Hazmat showing supposed love rival X-23 (superhero, or bus service?) who's boss, and Reptil demonstrating that if the hero work ever dries up, he'll make a teriffic relationship counsellor. Then there's Finesse hinting that if any Academy student is going to wind up a villain, it's not her.

And speaking of Finesse, there's a hint from her future self as to her father's identity - someone prone to memory problems. Any ideas?

The only disappointment with this issue's script is that Rom doesn't put in an appearance. Surely Marvel and Parker Brothers will eventually sort out their legal kerfuffle, allowing the space hero to return to comics? He's referenced here merely as 'one of the spaceknights'. Boo!

A splendid package for $2.99 includes the best intro and recap page out there, and a regular letters column in which Gage engages in honest dialogue with the readers. Topping off the book is a cracking cover courtesy of Rodin Esquejo and while Reptil is the wrong colour, it's a better one. The logo placement is a bit rubbish, but you can see why. Two months to go until A vs X! Like, thrillsville.
Avengers Academy #25 review