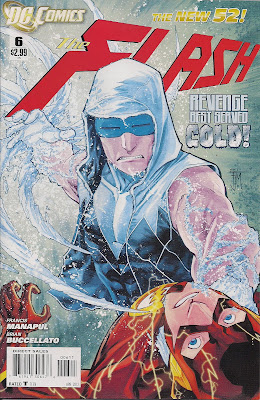 See that fridge in the kitchen? It's a lot smarter than its equivalent of five years ago. And so is Captain Cold. The head of the Rogues' Gallery has dumped his cold guns after internalising his power and is back to wage war on the Flash.

And this time it's personal. The electro-magnetic pulse which recently rang through Central and Keystone Cities has been blamed on Flash - and it's wrecked Cold's attempts to help sick sister Lisa. So Cold menaces a boat-turned-restaurant to bring Flash out in the open. As luck and comics would have it, Flash is there already in his other identity, Barry Allen, with girlfriend Patty Spivot and reporter pal Iris West. Having defeated Cold many a time, Flash expects, if not an easy ride, a successful one. But Cold has a few new tricks up his ...

No sleeves. Captain Cold has a new outfit. It's a tad fey.

Never mind, the original will be back - the classic looks always reassert themselves eventually. Meanwhile, the Flash must work extra hard if he's going to save the innocents menaced by Cold - not previously a killer - and bring in his man. An extra wrinkle is provided by Flash's link to the Speed Force, which means that if he hits a certain level of energy release, the time barrier is breached, bringing Heaven knows what through.

This thoroughly entertaining issue also includes a twist on one of the Flash's old toys, romantic shenanigans with Patty and a kidnapping mystery. Writers/artists Francis Manapul and Brian Buccellato continue to shine, bringing a thoroughly fresh take on Barry Allen that retains plenty of good stuff from years past while offering up original ideas. I'm not kidding. These guys aren't 'simply' adding a sheen of modernity to proceedings, they're rethinking what it means to be a speedster. And I like the answers they come up with each month.

I also like their layouts, which somehow manage to dazzle with their ingenuity without ever bringing the story to a full stop. As usual, the splash spread is among the highlights, as Manapul incorporates the strip's title into his linework, and Buccellato adds extra vibrancy with his colours. And there's something just plain likable about their people, a quiet humour. Well, except for the understandably peeved Captain Cold, who gets a bit of a makeover out of costume too.

I don't like the costumed Cold's new look, but I do like the new-look Cold as he taps his full potential while still viewing himself as just another working stiff. And is the name of the eatery an Easter egg, a coincidence or a hint that there's a Jay Garrick, the Golden Age Flash, in the DC New 52 world? 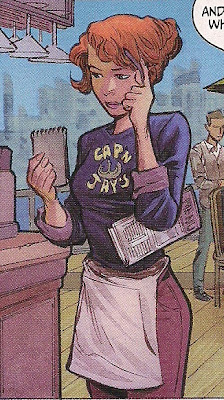 The only thing I'd change about this issue would be the way it's plotted. The story, as I've indicated, is a winner, but the ordering? Not so much. We go from Now to Yesterday to Last Night to Now to This Morning to (an unannounced) Now to Fifteen Minutes Ago to Five Minutes Ago to Now. I get it, Manapul and Buccellato wish to open on action and sprinkle a little mystery as to how we got to this point. But the technique, pioneered on such TV shows as Alias, has become as cliched as the end montage accompanied by the dreadful Hallelujah. It's a way of ramping up the drama that feels artificial. And it's not needed in The Flash - the creative team puts enough great stuff into this book to justify every scene being Now - an ongoing Now.

And if we really must start on action - heaven knows why, I'm sure all readers will trust something to up the adrenalin will come along soon enough - comics do have a tried and tested tool. The p1 splash page previewing events later in the book. It worked in the Silver Age and it's ripe for reinvention; and it isn't as if it would be needed every issue, I'm sure some instalments would naturally begin on action.