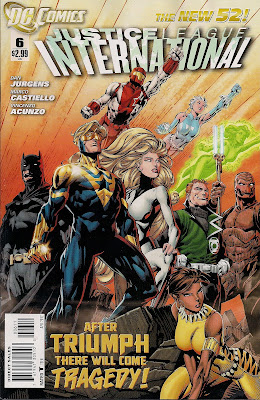 After five months of the Signal Masters storyline, which culminated in the new JLI sending the godlike Paraxxus packing, it's time for some downtime. For the heroes, though, that doesn't mean sitting around - it means cleaning up loose ends around the globe - giant robots, citizen bombers, that sort of thing.


This issue, then, is in the main a series of sub-teams getting to know one another. There's Batman imploring Booster Gold to keep the JLI going even if the United Nations withdraws its backing, while they track down the protesters who bombed their Washington DC headquarters back in #1; Ice, Guy Gardner and Rocket Red discussing Booster's leadership ability as they dismantle a robot behemoth in Peru; Godiva and August General in Iron dealing with a bomb in New York over a hotdog; and Booster, Vixen and Fire arguing the case for the JLI's continued existence with the UN's Security Group.

Plus, there's an explosive cliffhanger, a phrase I suspect I'm using a lot in relation to DC comics lately - exploding teams are the new ripped-off arms, it seems.

Still, it's great to get to know the members a little better after the breakneck pace of early issues. Ice gets back an old origin; Rocket Red gets mind-zapped; Godiva loses the cod-Cockney while getting a bit of depth and a new friend in August General in Iron (what a mouthful - anyone for Augie?). And I love that Batman has total faith in Booster's ability to make a go of the team - there aren't many non-Gotham heroes whom he sees as a peer, but Booster's one. And the man himself puts his future past to good use in telling the UN bods just where to get off, tickling Vixen and Fire.
That, and intervention from Augie, sees the UN deciding to retain the JLI, positioning them in relation to the independent Justice League as 'a group without secrets'. I do hope not, that'd make for some dull comic books. But the UN wants the team to help inspire faith in governments, by being noble and transparent - the people's heroes.

I'm intrigued to see this new tack instituted by writer Dan Jurgens, as it makes the JLI sound positively socialist. I hope he does something with the idea, rather than ignore it and have the JLI carry on like any old super-team. I'm convinced he's better than that, though, Meanwhile, he's given us an issue full of incident and character dynamics, a fine coda to the team's first storyline. The only moment that gave me pause was Augie bothering to rip off his shirt before stopping a careering van - wotta ham.

Jurgens is aided by guest penciller Marco Castiello and inker Vincenzo Acunzo, who retain the vibe instigated by regulars Aaron Lopresti and Matt Ryan while making strong storytelling choices of their own. Their Batman is especially impressive - Bat-Office take note! Augie also looks superb, with the excellent colour work of Hi-Fi Designs proving key (click on image to enlarge). 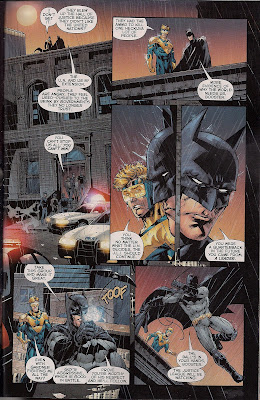 The good-looking cover is the work of illustrator David Finch and colourist Richard Friend. (Come on Booster, give Godiva her hair back ...)

Justice League gets all the marketing, Justice League Dark is the most intense, but this is my favourite Justice League book because it looks and feels like classic League. And that's a big compliment.
Batman Booster Gold Dan Jurgens DC New 52 Hi-Fi Designs Justice League International #6 review Marco Castiello Vincenzo Acunzo