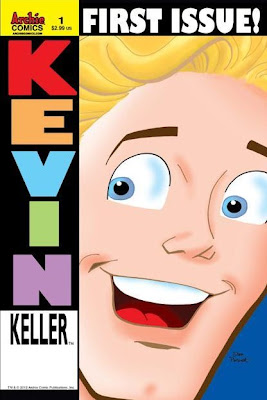 Recent Riverdale recruit Kevin Keller isn't worried about his new responsibilities as class president. He has other things on his mind - his first date. The guy who seems to be good at everything is a nervous wreck at the prospect of going out with someone.

But help is at hand. It's not help he's asked for, but such is life among Archie's pals and gals. Reggie suggests he does one thing, Betty tells him the exact opposite and Veronica agrees with one of them. Archie has tips relevant to no one but himself. Jughead lays out his predictably amusing idea of the perfect partner. And Kevin's parents are quietly supportive.

When the big day finally comes, Kevin realises the best thing to do is, well, you can probably guess, but that doesn't take away from a charming tale with plenty of smiles. Kevin is Riverdale's first gay character, but I bet most of us will empathise with his predicament. Who hasn't panicked over the first date? And the second. And the third ...

Writer/artist Dan Parent indulges in some fourth wall-breaking to introduce Kevin to new readers now he's no longer piggybacking on Veronica's comic. And while we accompany the likably klutzy Kevin through his week we're given a good look at the world of Archie, useful for anyone brought in by the media hoohah around Kevin's sexuality but unfamiliar with the Riverdale set.

The script is cute without being sickly, studded with the kind of simple home truths that it never hurts to hear again. And Parent's art fits the Archie house style while having a verve of its own. My favourite sequence sees Reggie take Kevin to pick an outfit for the date, a scene which is the perfect excuse for a fashion spread soliciting ideas from readers. I might have sent a look in that's just perfect for the gay lad about town, but - courtesy of Parent and talented inker Rich Koslowski - Reggie's already wearing it (click on image to enlarge). 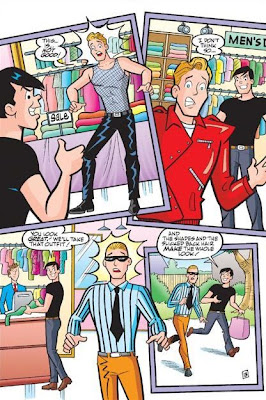 Where Kevin goes from here, I can't say, but I hope he finds not just a nice young chap, but a readership. Not because he's gay, but because he's starring in a fun comic that leaves me feeling warm and fuzzy. I like that.
Archie Betty Dan Parent Jughead Kevin Keller #1 review Reggie Rich Koslowski Veronica