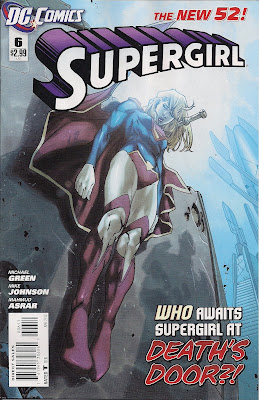 And this is where it all comes together. For five issues we've seen Kara Zor-El struggling to come to terms with being a stranger on a very strange world and the idea that her planet - her family, her friends - is lost. But this issue sees Kara accept the truth of her losses and fly towards a future unlike anything she could have imagined ...

The book begins in the past, as Kara receives some tough lessons from a physical combat robot - now we know where she learned to throw that punch she's so quick with. The memory has surfaced in what may be her last moments. Defeated by the living weapon known as Reign, Kara is pinned to an Argo City wall as the last remnant of Krypton hurtles into a sun. She's not alone, though; visions of parents Zor-El and Alura help her break her bonds and fly free, but with a heavy heart. She taps into the powers she thought faded and flies into space, in time to see Argo City disappear forever. 'My home is gone. And I have only one place left to go.'

Reign, meanwhile, has reached Earth, where she challenges the authorities to battle her, presumably for the right to rule. The army fights fiercely but are no match for the Kryptonian 'Warkiller'. But Supergirl may well be. Reign, though, is pleased by the arrival of her enemy, despite an almighty slugfest - if Kara won't rule alongside her, well, she has something else up her sleeve.

This really is the best issue to date. Writers Michael Green and Mike Johnson show us Kara's indomitable spirit - it's not simply a case of the 'ghosts' of Zor-El and Alura giving Kara strength, it's her inner strength that's conjured them up in the first place. She's the last daughter of Krypton and she won't give up (click on image to enlarge). 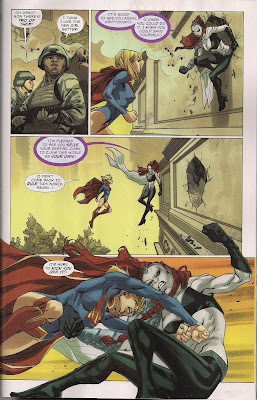 But now she's choosing to be a daughter of Earth, too. The above contains my panel of the week - I just love that soldier, and Kara's determination to save her new world. She's not moping, she's not viewing Earth as second best - it's a different 'best'. A planet she'll protect at any cost - this is Supergirl for Earth.

Interesting moments include the addition of a silver-haired young Irish immigrant to Supergirl's pretty much non-existent supporting cast - anyone who's been following Kara for a couple of years can guess who she'll turn out to be (if they've not already been spoiled by solicits); and Reign strongly implying that Supergirl is more capable than Superman. Green and Johnson really are hitting their stride. I have just two complaints, one to do with story detail, and one with presentation.
Firstly, why does Supergirl have such a problem getting free of Argo City? So far as we can see, Reign's axe isn't actually pinning her to the wall, it's pierced her cape. Take it off, dear.
Secondly, an issue that's coming up again and again with regard to DC's new 52. Splash pages. They're everywhere. Unless circumstances are exceptional, a 20pp story shouldn't have more than a couple. Even before last September's line-wide relaunch it was common for DC comics to have three splashes - one of the opening three pages, the final page and perhaps one big moment along the way. This issue has a page three splash of a broken Kara that's powerful, but basically another view of the cover. There's one page of Reign arriving on Earth. Two pages of Kara leaving Argo City behind. One page of Reign smashing up New York. One page of Kara punching Reign's lights out. And a closing spread showing us what Reign has up her sleeve.

That's eight pages - almost half the book - taken up with extra-sized images. And I'm not saying they're not great images - Mahmud Asrar is producing outstanding pages, and Dave McCaig's colours do the work proud. And the spread of Kara weeping as she bids her past farewell is beautiful, the emotional culmination of the reader's half-year journey with Kara. I'd defend its inclusion to anyone. But the rest? Arguable. We could easily reduce the opening splash to half a page as the cover has already given us the information therein. Reign doesn't deserve two spotlights, the arrival splash could be cut. And the final, annoyingly sideways spread, could easily be a single page. So we keep the poignant space double-page, Reign wrecking NY, Kara defending it and the surprise ending. Five pages of splashes - that has to be enough for anybody? And I think three is easily enough in a non-landmark issue.

Asrar's designs for daily life on Krypton work well, blending aspects of versions seen down the years. I especially like the wacky training robot, and Supergirl's energy armour. The fight with Reign is outstanding, as Kara finally has a target worth hitting. The malice in Reign's expression is chilling. And his design for the Oirish newcomer shows Asrar can do earthly as well as unearthly.
Green, Johnson and Asrar are developing superb creative synergy on Supergirl - if only they'd be just a little less splashy about it.
Dave McCaig Mahmud Asrar Michael Green Mike Johnson Supergirl #6 review