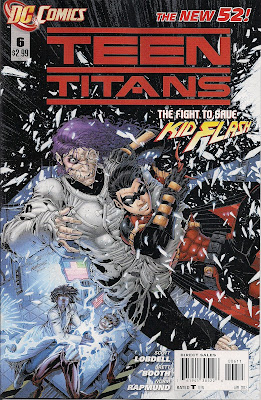 Kid Flash's run-in (sorry) with Superboy has left him out of synch and in danger of vibrating to death - can the rest of the Teen Titans find someone to save him? Who's the emotion-controlling loony at STAR Labs who uses Skitter against the other teen heroes? And why is someone from the 31st century impersonating a current day police officer?

These are the questions raised in an above average issue. Some of them are even answered. Kid Flash's problem is quickly solved because this is the DC Universe, where geniuses are ten a penny. What's gratifying, though, is that as the Titans are in New York the genius in question gets to be Virgil Hawkins, aka fellow teen hero Static. It turns out that not only is he a pal of Red Robin's, he provided him with his new wings.

Other things we learn are that Kid Flash was raised an orphan and is a wanted man in the future, Bunker* is smart enough to give Red Robin a run for his money as leader and while Wonder Girl can speak Spanish, she has a lousy gaydar.

There are other incidental pleasures, but I shan't spoil them all. Instead let's have, not a complaint, exactly, but a query. How the heck is this guy speaking? Grymm looks like Joker Jr but it's another Batman villain, the Ventriloquist, he brings to mind with his closed-mouth jabbering (click on images to enlarge). 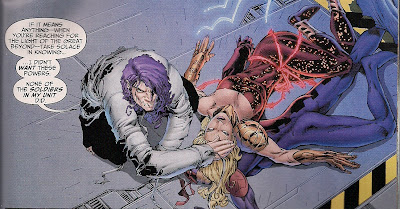 I enjoyed that; let's have another question. Wonder Girl, is this really the best way to carry a lariat that seems to be, basically, electrified barbed wire? There's trippy, and then there's tripping oneself up.

And back on the subject of communication, if Superboy really has caused Bart to accelerate to the speed of thought, how is anyone understanding a word he says?

Oh well, the main thing is that this is an entertaining issue that lets us get to know our heroes a little better, drops a new mystery on us, introduces a villain with definite possibilities and presents a (hopefully) future team member in Static. I'll say 'job done' to writer Scott Lobdell, even if if he does insist on having the very silly Skitter around. I don't have a favourite moment this issue - I have two. One sees Red Robin explain to Virgil why he reckons he has more chance of helping Bart than the Flash. The other involves Bunker's knowledge of Supervillain 101. They're two fine character moments, the type that lift a standard teen book above the average.

Brett Booth and Norm Rapmund mesh well as penciller and inker, their layouts crackling with energy. And while, Solstice apart, I don't like the Titans costume designs, they work well together - everyone has their own look that reflects a little of who they are. And they draw a great Virgil - let's hope they're called on to depict him in costume soon. There's also smart colour work from Andrew Dalhouse and lettering from Dezi Sienty.

As I said, a good issue, helped by the fact that the NOWHERE plotline takes a backseat. Hopefully, once the upcoming Superboy/Legion Lost crossover is over it'll vanish completely and give the Titans room to relax and find new, more engaging challenges.