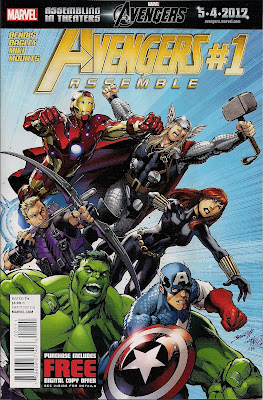 The movie's not out yet, but here's the comic tie-in. The idea is that this book features the Avengers seen in the film, but in the regular Marvel continuity. So while there's a crowd shot featuring the likes of Wolverine, Spidey and Spider-Woman, the focus is on Hawkeye, Black Widow, Thor, Iron Man and Captain America. The green Hulk has his own scene and will presumably join the other heroes soon enough.

The story itself sees the organisation of a new version of villain gang The Zodiac. Soon Aquarius and Taurus are gathering maguffins, bringing them into conflict with our heroes in separate vignettes. Hulk versus a chap made of water makes for a busy, if daft, scene - where's the threat? A bunch of military men get excited and fire stuff, but Hulk vs tapwater, really? HULK SPLASH! The big, scary man-bull that is Taurus make for a more credible opponent, a magical base making him effective against the Avengers' biggest guns.

Credit to writer Brian Michael Bendis for giving us a more action-packed comic than is his habit. His trademark banter works well, with the exception of a needlessly crude request from Clint to Natasha. The idea that this is regular Marvel continuity doesn't quite convince - the Zodiac is set up as if they're the first iteration, Hawkeye and Natasha forget that he was dead awhile back, Aquarius thought Hulk was a myth - but I can live with it. The vibe is close enough to both the comic book and film versions to work.

My favourite dialogue scene is the opening speech from Cancer, a nicely measured call to rally. It's not as snappy as 'Avengers Assemble' but does the job with eloquence.

On the art side, penciller Mark Bagley and inker Danny Miki provide explosive layouts, with the two fight scenes looking great on the page. They don't bother trying for likenesses of the actors (or more likely, aren't allowed to), but God bless Bagley for giving Thor his helmet! The base costumes of the Zodiac members are unprepossessing, but get more interesting as they use their powers.

The artwork benefits greatly from having the superb Paul Mounts as colourist, while Clayton Cowles has a ball with sound effects.

Bagley's cover isn't brilliant, it looks as if the Avengers are trying to balance on some out-of-shot beachball. Black Widow, especially, looks about to fall flat on her face.

Overall, though, this is a decent Avengers book, with a pleasingly old-school feel. I can't see myself coming back next month because the mix of characters isn't my favourite, but I expect Marvel will get a dozen or so issues out of the tie-in. Let's just hope the marketing bods have some grand plan to get this under the noses of fans of the movie who would welcome a jumping-on point. Spinner racks in cinemas? Ads with comic shop addresses on the back of tickets? It's not rocket science, is it?

While there are no credits here for the creators of the various characters, Bryan Hitch gets a nod on the title page for designing Hawkeye's costume. It made me laugh, but in a sad way.
Avengers Assemble #1 review Brian Michael Bendis Clayton Cowles Danny Miki Mark Bagley Paul Mounts