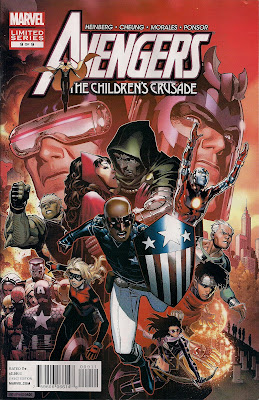 Last issue, Stature died fighting Dr Doom. Now the question is, should the assembled Young Avengers, Avengers, X-Men and X-Factor allow Iron Lad to take Cassie's corpse into the timestream in the hope that future medicine can bring her back?

The answer leads to the brutal loss of another Young Avenger, a second going down a very dubious path and a turning point for the remaining members. They've been through a lot since they gathered after the tragic events of Avengers Disassembled. Now, not only are the adult Avengers back as a team - several teams, actually - but the woman who wrought so much chaos that day, the Scarlet Witch, has returned too, her sanity back. It's time for everyone to take a breath and decide where to go from here.

Her father and brother, Magneto and Quicksilver, want to spend time with Wanda. Cyclops orders her to make amends for wrecking the lives of thousands of mutants on M-Day. The Scarlet Witch herself wants to be a mother to Young Avengers Speed and Wiccan, while doing what she can for the people she - however inadvertently - hurt.

As for the Young Avengers, they act like the adult original team and decide to split up, go their own way for awhile. Months, in fact, as this long-delayed mini-series catches up with the current Marvel Universe. We see members ignore crisis after crisis, donning costumes again only when summoned by Captain America for a ceremony at Avengers Mansion. The then-destroyed property was the scene of the teenagers' first gathering, by the statues of Avengers lost in battle. Now the rebuilt mansion is the setting as events come full circle, putting a cap not just on this mini-series, but on the first phase of the Young Avengers' existence.

Because they'll be back. Even as they go into retirement here, Speed reckons it won't last, and Hulking hopes that's the case. Meanwhile, this book has finally laid the appalling story that was Avengers Dissassembled to rest. Wanda is back, Ant-Man Scott Lang is alive again, Dr Doom has claimed 'credit' for the crisis ... Hawkeye and the Vision both returned in the Avengers series proper. And the Young Avengers can make their own way in the world, free from the responsibility of replacing the adult heroes before their time.

This is, overall, a gloomy read, with heroes understandably not in the cheeriest of moods. They're exhausted and, frankly, so am I. Those delays I mentioned have taken away from the initial excitement of having the Young Avengers back, as this book existed in a strange limbo apart from the rest of the Marvel Universe. The catching-up page is necessary, but it means that a scene which, really, should have occurred about a week after the main story comes months later for no reason other than, perhaps, Alicia Masters having a busy schedule. And what exactly has Wanda been doing all this time? She's not been a presence in the Marvel Universe during this period. Plus, there are so many little chats to be had in Allan Heinberg's script that there's no room for a big, cathartic splash of the Young Avengers going into the sunset. You know, the plucky survivors watched over by cheery ghosts. Instead, the final panel is a mix of Young and adult Avengers and some woman I don't recognise being hugged by Hulking. Jessica Drew? A second on-panel Kate-Hawkeye? Probably it's Cassie's proud mom, but who can tell?

Before that we do get a big picture of two of our heroes sharing a big moment, which is sweet. I'm sure One Million (Bigoted) Moms will be thrilled. It's the happiest scene in the book, so I'll take it. Actually, it's the only happy scene - this really is an issue for the Gloomy Guses among us. Artists Jim Cheung and Mark Morales have little in the way of fun moments to illustrate, and the only action echoes one of the nastiest parts of Avengers Disassembled. Still, what they do get to draw looks pretty good. The transition page between then and now, with Wiccan in the same pose over several frames as Hulking reacts to the world around them, is a great rendering of Heinberg's clever narrative device.

I've enjoyed previous issues, but am left feeling flat by this conclusion. While the tragedies that hit the Young Avengers act as a neat bookend to their first phase, I think the heroes deserve better. They were keepers of the Avengers flame when there was no one else, and it'd be nice to see them all alive, together and being thrown a parade. As it is, given Marvel's reluctance to have anyone but Heinberg and Cheung tell the team's stories, it could be a long time before we see them again. Let's hope not.
Allan Heinberg Avengers Avengers: The Children's Crusade #9 review Jim Cheung Mark Morales X-Factor X-Men Young Avengers